Update: It’s impossible to keep up with what’s going on in Portland, even for those with boots on the ground at the protests. As soon as I published this piece everything changed, and continues to change daily. Wall of Moms became controversial because it didn’t include Black Lives Matter; it transformed into something that rightly puts Black leadership at the forefront. Riot Ribs had to dissolve because of harassment from without and within. The Feds finally left, there’s discord between how protests should be carried out, but ultimately, we have some strong Black leadership, and protests continue to evolve. Portland Police need defunding, we’ll hopefully have a new mayor in November, and we’ll see. While I abhor the violence, it gets the attention and creates change, so there sometimes seems to be no other choice. We’ll see.

The protests in Portland have ebbed and flowed for the past seven weeks, and are now back to peak crowds as baton wielding Federal officers, sent by Trump, have stepped into the fight, supposedly to protect the U.S. courthouse. I can’t think about much else these days. I go to sleep and wake up with it. It has detonated the air with deafening flashbangs, thick clouds of tear gas, and pepper bullets. Worst of all, protesters are getting dragged into unmarked vehicles – minivans and SUVs for god’s sake.

I live five miles away from it all, and you’d never know what was happening if you didn’t tune in to the news. Outside the tiny pocket of downtown Portland it’s peaceful, and quarantined life goes on. Even the protests themselves have been fairly peaceful.

When videos showed the brutal and outsized response of federal Homeland Security agents terrorizing peaceful protesters, a new wave of outrage shook the city. Crowds of protesters returned to the downtown streets. In a miraculous vision of intrepid power, a young woman took off her clothes and calmly stood her ground, wearing nothing but a face mask and beanie. The feds shot pepper bullets at her feet, and then turned tail and withdrew. She calmly walked away like the goddess she was. I was stunned. The power of the feminine, so stark and real, and so uplifting in a dark time. 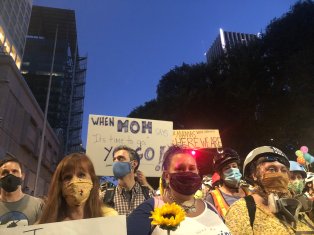 Then came the moms. First by the dozen, then hundreds, and now we’re back to thousands of people thronging together on the streets. Moms wearing yellow, holding large yellow peace symbols and sunflowers, sweatshirts tied firmly around their waists. Moms speaking up for the youth, magnifying Black lives and Black voices, and answering George Lloyd’s call for Mama.

Moms carrying signs scolding as only a mother can, “Think about your sad choices. — Mom.” 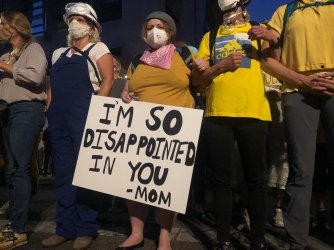 Pissed off by Garrison Davis 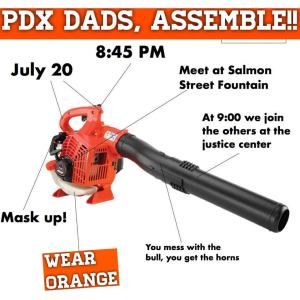 In a yellow wall, moms linked arms and took over the front lines in a show of determination and strength. More moms showed up, and then dads wearing orange came, carrying leaf blowers (to blow away the teargas). So Portland. Humor amidst the outrage. Most of these women are terrified, but they’re there anyway because they feel that strongly about this, making it even more awe inspiring. The front line of moms served as a shield for other protesters, and it grew until they were a protective barrier all the way around the crowd. They sang We Shall Overcome, and One Love, and in a lullaby singsong, told the federal agents to stand down, leave town.

On the one hand it seems ridiculous to see these moms in shorts and ponytails, linking arms on the front lines. As my friend Jeanne said, it’s like wearing capes made from towels. It’s even more absurd to see federal officers in 50 pounds of protective riot gear and weapons, charging with raised batons into this crowd of women weighing half as much. They’re shooting teargas point blank, and one mom reported a cop saying “Fuck you” as he sprayed. 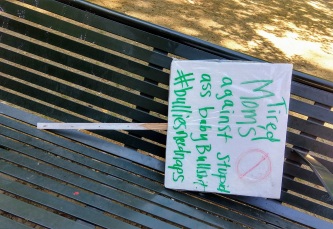 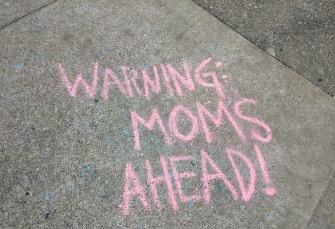 But it’s less ridiculous when you see the moms’ resolve, their unflinching bravery in the face of their own terror, and their willingness to take the hit to protect others. They are mama bears drawing up to full height in outrage and defiance – until one by one they have to back down from clouds of gas, or from being struck by batons. As one woman said, “It hurts, but not like childbirth.”

I headed down to Lownsdale Square Tuesday morning, after the crowds had cleared, to see for myself what was going on. This usually peaceful little park sits across from the U.S. Courthouse, the epicenter of protest activity, now boarded up and covered in graffiti. Five years ago I sat quietly on one of these shady benches to eat lunch every day during a long jury duty stint along with dozens of office workers and a few unhoused folks. Today the crowd is larger, mostly the unhoused and people living on the edge. Everyone was relaxed, sprawled on lawns and benches, resting up after the late night. The weather was still cool before the heat of the afternoon, and folks sat in small groups, chatting, eating, drinking coffee, and napping. There was also a small stream of onlookers like me, trying to get a sense of the damage and the spirit, looking for answers. While the federal Homeland Security officers were out of sight, a few Portland police officers were going about their business or keeping an eye out. 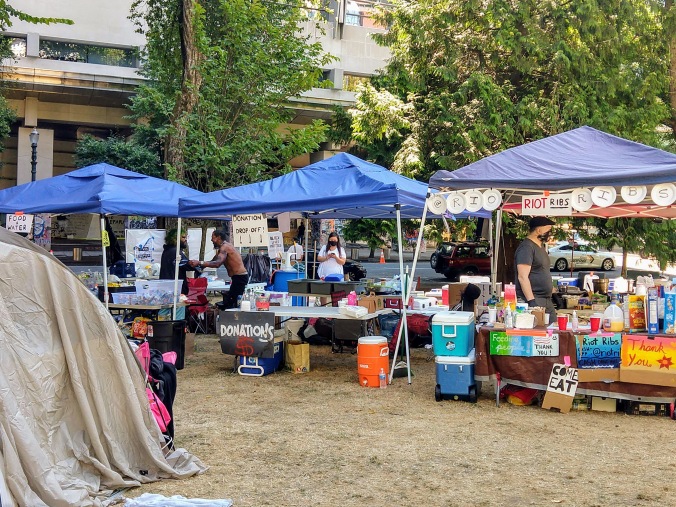 I was happy to see Riot Ribs up and running again in the middle of the park. The all-volunteer group has been here during the protests, feeding anyone and everyone, 24/7. They seem to have bounced back mightily after being tear gassed and beaten the night before, with medical supplies, food, and water strewn or confiscated just a few days before that. The volunteers sent out a tweet to say there’d be pizza available, and moms brought in homemade cookies. The night after my visit there, the feds raided again, clearly targeting these volunteers who were merely feeding and helping people on city property. Again, Riot Ribs re-grouped quickly and continued their work, as determined as the Wall of Moms, and all the protesters.

Donations trickled in as I stood there. A young woman unloaded a dozen gallon bottles of water from her car, and others carried in boxes and ice chests. Volunteers handed out food, drinks, and clothing, while keeping a BBQ grill continually running. A young man at the donation table said it was his first day volunteering, but was enthusiastic about feeding people no matter their need, hoping it would become a permanent thing. I dropped some cash to assuage my sorrow and guilt at not being there to protest. I’m too virus phobic to attend the demonstrations, but my heart is with them every step of the way, and I like to think I would risk arrest and bodily harm if not for the life threatening risks of the pandemic.

History has its eyes on you 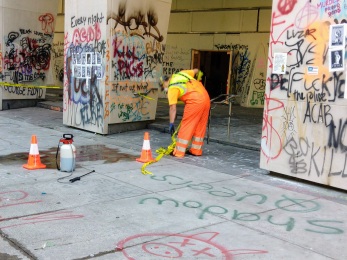 Cleanup at the US Courthouse 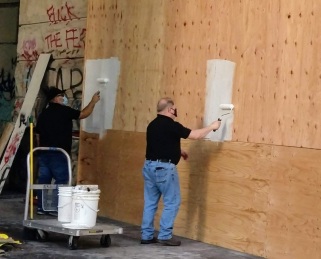 Building a wall US Courthouse

A dozen orange vested workers worked to remove the paint from the sidewalks and walls of the courthouse, putting up new boards over windows, and painting them. These boarded-up walls have small covered holes along the sides, which protesters call “murder holes.” It calls to mind medieval castles where the besieged poured hot oil down onto the invaders below. Here, police swing the doors open from inside to throw tear gas and flashbangs, without having to engage. Military tactics have changed only a little. 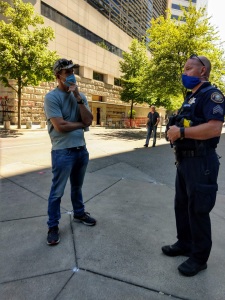 Friendly cop (for now) with a guy who flashed a badge

I spoke to a policeman watching from a corner. He was friendly and relaxed, at least while chatting with a non-threatening older white woman. He said he’d been here for 9/11, for the Bush-era protests, for Y2K, and for the Occupy movement, and that this will also end somehow, sometime, though he didn’t know how. Protesters are fickle, he said, looking for the next shiny thing, and will move on to complaining about “not enough unicorn parking.” He’s just waiting this out. But for now, the presence of the feds have increased the crowds and the violence, and the cop thought the larger crowds just give an excuse to those who want to be violent, though he wasn’t blaming the feds directly.

For now, the moms are here. The attention they’re getting is perhaps outsized and unfair after the work BLM folks have shouldered all this time without much recognition. But there’s something about motherhood, something about hearing Floyd’s call for Mama that has caught our imagination. We look to moms to protect us from harm. I’m familiar with that upsurge of strength that comes from deep inside, willing me to trade my own safety and comfort on behalf of children and the powerless. The symbolism of these protesting moms is not lost on us. We laugh at the hopelessness while rising up in tandem strength at their sheer audacity. While protests rarely change policy, they do change public sentiment, and I’m holding out for a new government to be be voted in soon, one that does not stoop to terror and gestapo tactics as a political gesture.

In the meantime, I can’t get the images out of my head. 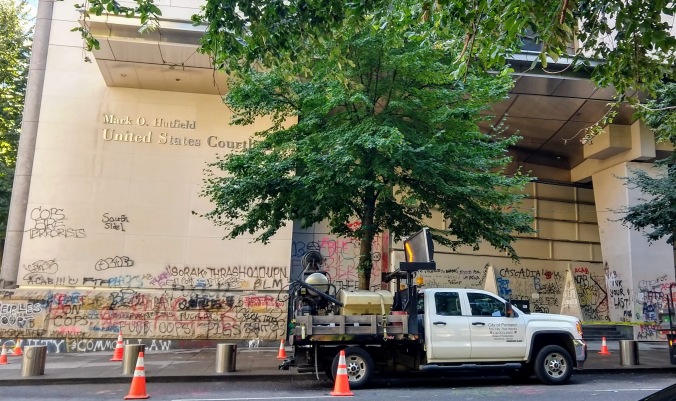 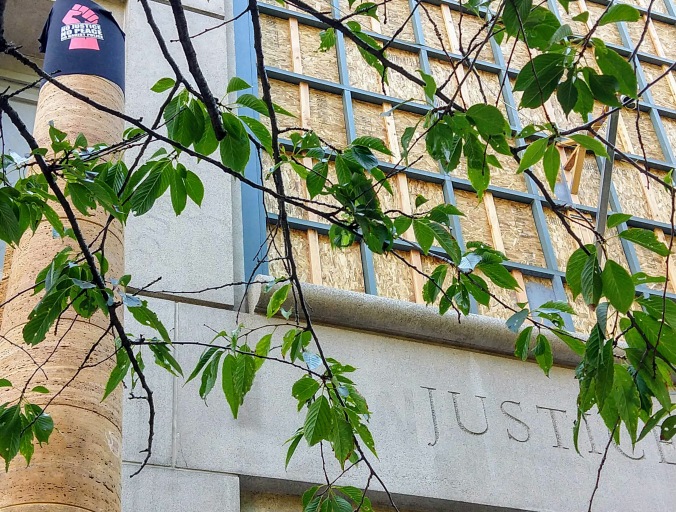 No Justice No Peace No racist police

Chapman Square and Justice Center – Pioneer family and Jefferson quote to the Osage Nation, “We are all now of one family, born in the same land, and bound to live as brothers… to do to each other all the good in our power.” 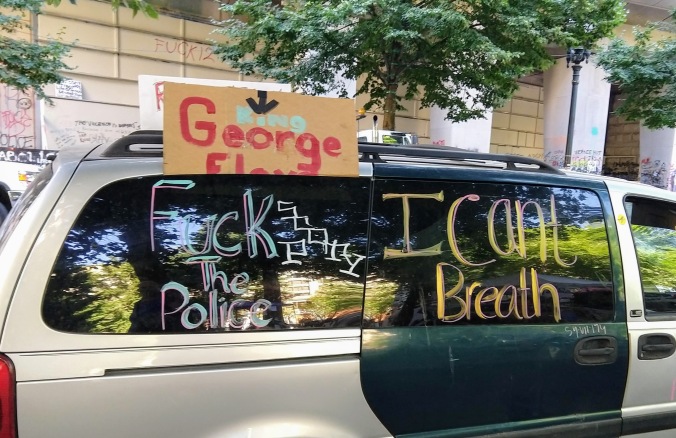 Parked between Square and Courthouse – and the beginning of demonstrations, May 25, 2020

Join 238 other followers
Follow Rivers and Roads PDX on WordPress.com