It snowed on Saturday as the first person in our city died.

It was a milestone that brought everything into relief. No going back, only forward. The first one – so much in that short phrase. Until now, no one in our city died of Coronavirus. Until now, and it won’t be the last.

The snow fell, soft and wet, making everything shimmer and shine, and a man died.

The first death. It feels hard, so close, though I didn’t know him. We were warned, and we scoffed, maybe just a little, maybe just at first. We didn’t follow instructions. It couldn’t happen here! Not to me, not to us!

There might be people to blame but that won’t do him any good. But maybe we can do better. Maybe we can be more careful. Maybe it will end here.

Our first death. We don’t know much about him. He was 70. He was a veteran. He had “underlying health issues.” He died at the Veteran Affairs Hospital which lies within OHSU, our hospital perched on a hill, overlooking the city and Mount Hood to the east, an iconic beacon of reflected light. These days it glows as the sun hits its snow capped pointed peak, and I stop and take a breath when I see it. Every time.

We sigh with relief, that we didn’t know him, that we aren’t vets, that we aren’t the same age, that we are fairly healthy. We don’t know if he was rich or poor, if he had family or friends, whether he lived on the streets or in a home, if his loved ones were able or allowed to say their goodbyes, or if he was in isolation, with only the brave medical personnel around him, separated by latex and masks.

He was a vet, and at 70 that probably means Viet Nam. Health issues may mean he could have been a smoker. Or it could be the ongoing effects of his service long ago. We’ll never know these things. And they don’t matter anymore.

We wait for the next one, holding our breath. Who will it be? How old will they be? Was it unavoidable, an unknown contact, a fleeting sneeze, an inadvertent touch of the hand? A germ on a surface? Will it be someone we know? Can we be the ones to lock this down before there are more deaths? 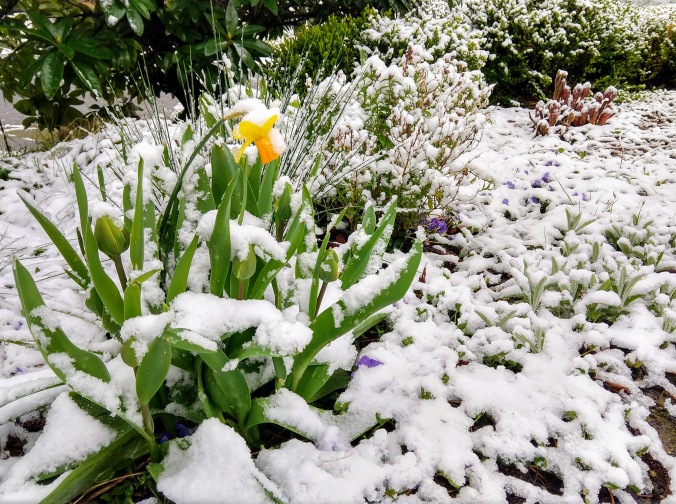 The snow came down in big fat flakes. It made a slopping sound as it hit the ground, and there were wet thumps on the roof as clumps of heavy snow fell from the magnolia that leans over the roof. The air was cold and fresh, and daffodils and grape hyacinths poked out of the ground, ice crystals lying along their leaves. We call it second winter, as the days had already warmed up quite a bit the week before. The lettuce, radishes and peas are planted, though still under their plastic shelters, tucked in every night. Everything felt fresh and new.

The snow fell, sometimes at a diagonal, sometimes straight down. It flew in spirals as the breeze pushed it around. It melted on the roads, and clung and clumped and mounded on the soil. He was dying and we didn’t know until later, after we walked in our winter wonderland in the middle of March. He was dying and medical professionals were fighting for his life, trying to give him one last day, to get him over the hump, trying to understand what was happening, where help will come from, who will pass laws that will make it better, easier, for the next person.

The crisis tugs at my insides. I live on the edge of moments, the next bit of news, the next email, the next phone call, the next bit of world reaching for me. Unable to resist, and impossible to turn away. I return home from an errand, full of relief to be back in my house. Where it’s safe. I hope.

A friend reminded me about the space between my thoughts, a place to focus instead of on the other thoughts crowding in. But I ride my thinking like a bucking bronco, clinging for dear life, hoping to stay with one thought before it dissolves, distractedly reaching for the next thought, the next word, the next emotion. How that space between will help isn’t revealed to me yet, but I know that it’s there when I need it. When I remember.

I cling to the cheering moments, and you do too, the ones you hear about everywhere, if you’re tuned in. We grasp onto these slices of irrepressible optimism and helping hands as if to a lifeline.

In China they built hospitals in a week. One week.

In Italy, people sang together on their balconies. A man played his accordion.

In Spain, someone shouted out Bingo numbers, and others played from their apartments.

They gathered to clap for medical personnel from their windows.

An Italian air show flew overhead spewing red, green and white, the colors of the flag, a rainbow of solidarity over people who have never had to keep a social distance, and are now learning how.

In China and Italy the skies have momentarily cleared, unpolluted by fiat.

The Chinese sent medical supplies and personnel and experience to Italy, an act of tremendous hope and generosity.

And there’s always the free-range penguin videos at the Shedd Aquarium.

Neighbors, friends, strangers reach out, how can we help, what do you need. I walk the neighborhood (keeping my distance) and people smile and say hi, behind their eyes a new knowledge, awareness of our connection, and our need for each other.

My friend in Spain said she woke up on the first day of their enforced quarantine to an eerie silence. Her window looks out over the Alhambra, suddenly empty of the teeming crowds of tourists. The Alhambra, a 13th century masterpiece, that will survive us all.

Alhambra at sunset, by Alan

7 thoughts on “The First One”

Join 230 other followers
Follow Rivers and Roads PDX on WordPress.com

Ode to the Garden