Robert Hunter, the lyricist for the Grateful Dead, was also the lyricist for my life. His words threaded through my life since I was 21, when I met some new friends, Harold and Alan, and a community of people that became my tribe. Would I be who I am without Hunter? 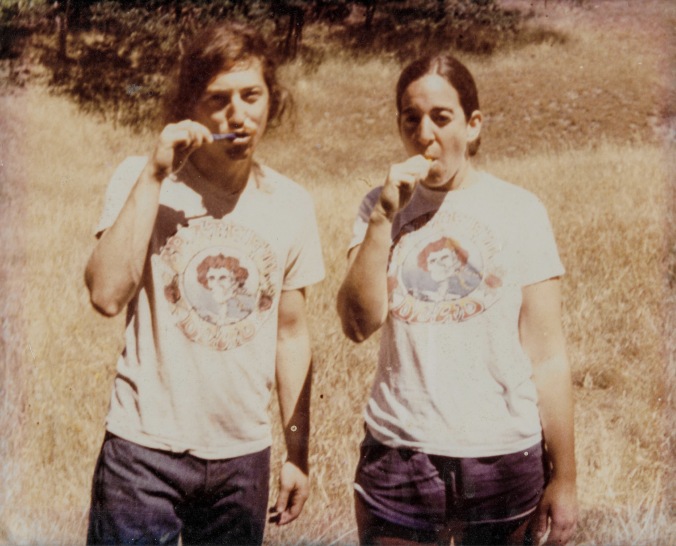 This is us. Deadheads of the heart. Photo by Michael MacAllister

Harold and Alan insisted that I give those Dead albums a deep listen, usually at high volumes, usually while high. At first it was noise, and I preferred my beloved folk music like Joni Mitchell and James Taylor. But they had me lay down on the orange shag carpet in my apartment on Peach Terrace in Santa Cruz, headphones over my ears, eyes closed, telling me to just allow my brain to let go, allow my consciousness to trip lightly over words, notes, and the gestalt of the whole. One day as I listened to Europe ’72, the song Jack Straw came on, and suddenly I got it, finally hooked in, the quivering equivalent of religious ecstasy. Now it was my music too.

We used to play for silver now we play for life
And one’s for sport, and one’s for blood at the point of a knife
And now the die is shaken, now the die must fall
There ain’t a winner in this game
Who don’t go home with all
Not with all.

I went with Harold and Alan to Dead shows up and down California from San Francisco and Oakland to Sacramento and Santa Barbara. Now I absorbed the lightshow choreographed to the music, the smells of pot, sweat, and patchouli, the arms waving and hips swaying, the ecstatic faces around me, intruding into my personal space which just became all of our space. Hunter’s words poured down on our souls while Jerry Garcia’s notes tore through our bodies. The bass and drums vibrated us into wakeful awareness, the piano and guitars gave us notes to dance on, and we leapt from one to the next. As the red spotlights turned out onto the audience the band sang, “The wheels turned around and the letters read” and I believed for a long time that the letters in Tennessee Jed were actually red. I was open, impressionable, and elated.

Hunter’s words became a backdrop to my life. One stunning line after another entered my head at appropriate moments, fitting the emotion and texture of an event, there for me to take from it what I needed. At times the words couldn’t be separated from the music, and most particularly for me, from Garcia’s soul searing guitar, twisting my insides so I could barely hold still, or rendering me fragile or unmoored. Other times it was the words that went straight to my heart, rooting me in place as the notes played on.

I was at the right place and time, and fortunate to see Hunter singing and playing guitar a few times in my Santa Cruz years in the late ’70s. His performances were rough and singular, the spare ingredients of what the Dead cooked up as a group, and an unforgettable treat. I saw him at the Crossroads (or was it the Shaggy Fish by then?), a small dark bar I remember smelling of stale beer, penniless youth, and desperation, or maybe that was just me. He sat alone on a small stage, just a riser really, on a stool under a spotlight, steps away from where we sat.

He was a true troubadour, his deep voice belting out the lines of Tiger Rose, “We don’t care what Mama don’t allow here anymore” and “Promontory rider, territory ranger… step up.” His songs filled us with visions and adventure, a life out of reach but oh so tantalizing and desirable. He sang verses that didn’t make the final cut for the Dead, and others we hadn’t yet heard. I’m pretty sure it was at that bar where I first heard the words to the Terrapin Station Suite, a story that mystified and mesmerized me. He was not just a singer-songwriter, but a seer, a bard, and a storyteller, coming along at just the right moment transmitting meaning and enlightenment, a muse to light the path ahead or illuminate a story we’d left behind.

Let my inspiration flow, in token rhyme suggesting rhythm
That will not forsake me, till my tale is told and done
While the firelight’s aglow, strange shadows in the flames will grow
Till things we’ve never seen will seem familiar.

When our friend Harold died just a few years later someone managed to place his precious first-press shrink-wrapped never-played copy of American Beauty into his casket. We couldn’t play Ripple at the funeral, but afterwards we played it repeatedly, and for me it will always be Harold’s song.

There is a road, no simple highway
Between the dawn and the dark of night
And if you go, no one may follow
That path is for your steps alone.

Hunter’s poetry was sometimes simple and within reach. Poignant and grounding, allowing me to come back to my breath, or another perspective on who I am and what the hell I’m doing. Even my teenage daughter had the words of Eyes of the World tacked up on the ceiling above her loft bed, the first thing she saw in the morning.

His words were useful when my life spun out of control, or when I felt ungrounded, overwhelmed by the confusion of growing up, becoming an adult.

See here how everything
Lead up to this day
And it’s just like any other day
That’s ever been.

Some words were just good advice. “If you plant ice you’re going to harvest wind.” Sometimes the words brought me up short. “Ain’t nobody messing with you, but you,” bringing me around to a more balanced viewpoint as I explored life and love, and all that goes with it.

Some lyrics were harder to wrestle with, layers of meaning that appeared differently at different times, or were just opaque, impenetrable or baffling, needing more thought.

Hunter wrote songs that both entertained and opened new perspectives on what it is to be human, words that conveyed the inner workings of characters I’d never meet but somehow knew so well. Words that made me laugh and made me cry, sometimes at the same time. After I had kids, there were entertaining mis-heard lyrics, and instead of “roll away the dew,” they heard “all the way a Jew.”

That other Deadhead, Harold’s friend Alan, became my sweetheart and then my husband, and I owe Hunter an homage for that. What if there was no Grateful Dead? Where would my life be? I believe Alan and I would not be the people we are, have the friends and the life we have, without him.

We shared Hunter’s songs of love, songs that communicated for us, songs that guided and comforted us.

Can’t talk to you without talking to me
we’re guilty of the same old thing.
Talking a lot about less and less
and forgetting the love we bring.

I have spent my life seeking all that’s still unsung.
Bent my ear to hear the tune, and closed my eyes to see.
When there were no strings to play, you played to me.

Phil Lesh said it best: He heard so deeply what my feelings were when I composed the music [for Box of Rain], feelings I didn’t know I had until I read his lyrics. Though he didn’t write lyrics directly for me, for us, he knew what was deep within us. My connection to him had no basis in day to day life, but was real nonetheless.

Sometimes the songs that we hear are just songs of our own.

I recently saw Jorma Kaukonen (Jefferson Airplane, Hot Tuna) play long and strong, a fine guitar player still, at age 78, and celebrated the idea that we could all rock on into our 80s with a little luck and hard work. When Hunter died this week at age 78, I had to step back again, sobered by the realities and vagaries of life, the luck of the draw.

On Monday evening, September 23, Alan and I were playing music with dear old friends, jamming all sorts of tunes. Hunter’s name entered the conversation around his unusual collaboration with Bob Dylan on the record Together Through Life. Several people said, hey, we know one, and our friend David promptly ripped into Beyond Here Lies Nothin. Was that the very moment Robert Hunter died? I like to think so, that even as he passed from this life, his words went spinning out into the universe.

Thank you Robert Hunter, you made my life immeasurably better. Along the way you gave me the life I have now, and the friends I have still, and your words live on in us.

It’s all a dream we dreamed
One afternoon long ago.

14 thoughts on “It’s All a Dream We Dreamed”

On the Road Again