My mind lingers on death more often these days. I tell Alan that if I become too demented and disabled he should smother me with a pillow, but he hasn’t agreed. We both know I’m joking. Sort of. It’s not like death is breathing down my neck, but my creaky joints and slowing energy feel like I have to treat my body with the respect you’d give to an elderly aunt.

The end of life thoughts have something to do with turning 64 this year, and that more people near my age are falling ill or dying. Also, my mother died just before her 70th birthday, young and still healthy – until she wasn’t.

So as an amusing pastime, I’ve been collecting ideas as I hike and travel for a commemorative plaque with wise words to affix to a bench along some path. I enjoy them when I come across them, and I don’t have a cemetery plot like my parents and in-laws. Nor do I want one.

A bench under a tree in a niche in a corner near a fountain by a park. That would be good. Elk Rock Garden, Portland

I have fond memories of the Alta Mesa Cemetery near our house in Palo Alto. We could walk up the nearby dirt road, around the back of the apricot orchard, and into a back service entrance by the crematorium. It was a shortcut to get to elementary school and junior high, and a place to walk the dog. It was where I went with Daryl, my 5th grade boyfriend, riding on his stingray handlebars as he peddled, and where we walked holding hands, sweating in our nervousness, wiping them off on our clothes and then reclasping. It was where I went in 7th grade, to learn to smoke and act cool with my neighbor Lynne and her friend Maura, both a year older than I and more worldly. It was green and quiet, where I walked to think and be alone. 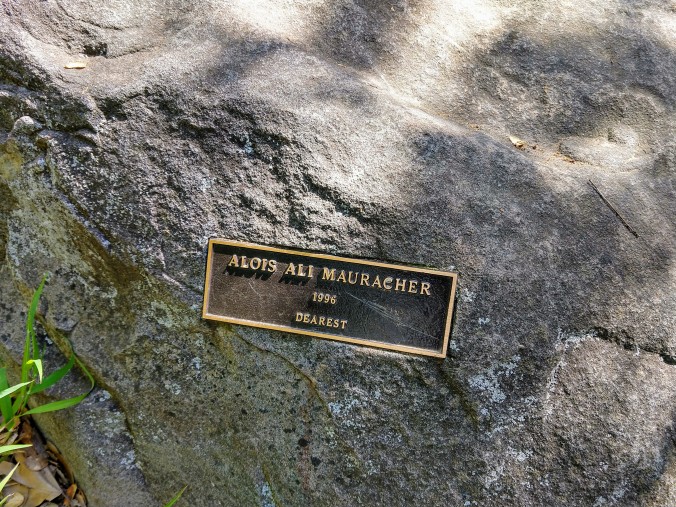 Simple and to the point. Dearest, Santa Barbara Botanic Garden

Our house backed up to Adobe Creek, its running water the soundtrack to my youth, a little wildness amid suburbia. It flowed in winter and spring and if the water wasn’t too high, we played in it, floating a tennis shoe on a string, or wading through the mucky, cold, thigh deep current. In the dry season it filled with poison oak which invariably infected one of us. I once had a case of full body itching, oozing welts that sent me to bed with wet sheets wrapping my limbs, alternating with oatmeal baths and a dose of steroids that sent me into rages.

The creek wound its way through brush and neighborhoods around the back of the cemetery (and eventually out to the San Francisco Bay). We buried mom on the edge of the creek there, along the vein connecting her to her beloved home. We four kids had to choose it for her, since she never had time to prepare for her own death, although the book we found on the living room end table, that she was reading when she died, was titled “How We Die,” so popular in 1995. Did she guess? I’m afraid to read it myself.

Did she think of herself as more? Something to be proud of, but a little old school. Wildwood Trail, Hoyt Arboreteum

Dad knew he wanted to be cremated, and long before his own death at 94, he and his wife Barb picked out a niche in an outside wall, also at Alta Mesa, where their ashes could one day be interred. They visited their niche occasionally, and it seemed to give him comfort to know he had a final resting place. 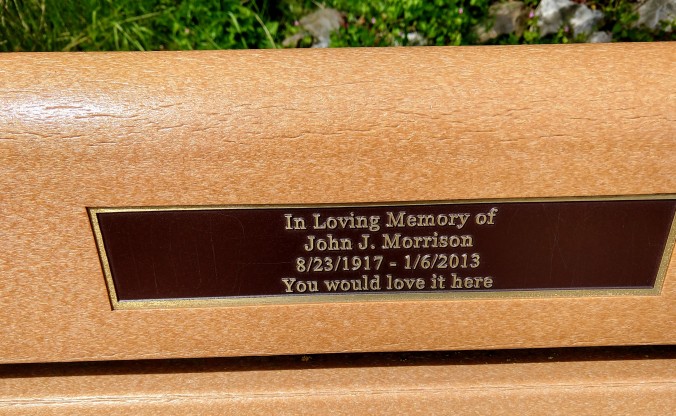 Survivors wishing he could be there with them? Cooper Mountain Nature Park

My father-in-law is buried in the old Jewish section of Ivy Lawn in Ventura. Ralph lies among the several generations of his relations there, including those who sponsored his family so they could escape Germany in 1939. He and Marilyn had previously purchased a plot in Ivy Lawn’s “new” Jewish section when it opened up, along with her sister, but then my mother-in-law didn’t want to spend eternity next to Uncle Carl, so they bought a double plot in the old family section when a space became available. Or so the story goes. That spot, where her parents are buried also, waits for her some day, hopefully far in the future.

United by love and the love of cinema. Maybe Alan would want to share a bench with me? Cabourg, Normandy, France, on the English Channel

But me, I’m more modern I suppose. Scattered ashes in my beloved Pacific ocean would be fine, or a mason jar in my children’s closet; they can do what they want. But a bench – that makes me happy. I like the idea of creating a place for the living to sit along a wayside where I too enjoyed walking amidst nature. It’s a connection to joy in my life, a place to visit for those who might remember me, or just a spot for passersby to sink down, resting weary legs, wondering about the stranger whose name is engraved there.

But what to inscribe there, how to cap my 70 or 80 or 90 years in a sentence or two? What line from a poem or what pithy literary blurb? Perhaps this too will be up to my children, or maybe, like my friend Beth, I’ll commission the bench and plaque while I’m alive to enjoy resting there myself, before that final rest. 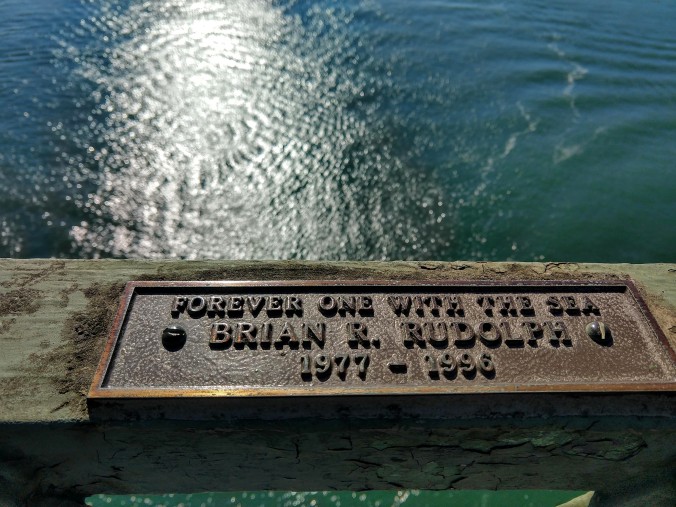 This is favorite. A young fisherman was swept to sea while risking his life to put food on our table. Deception Pass Bridge between Fidalgo and Whidbey Islands

A popular public defender and a river paddler. Murdered 10 years ago and an arrest just recently made. Wild Cherry Trail, Forest Park. 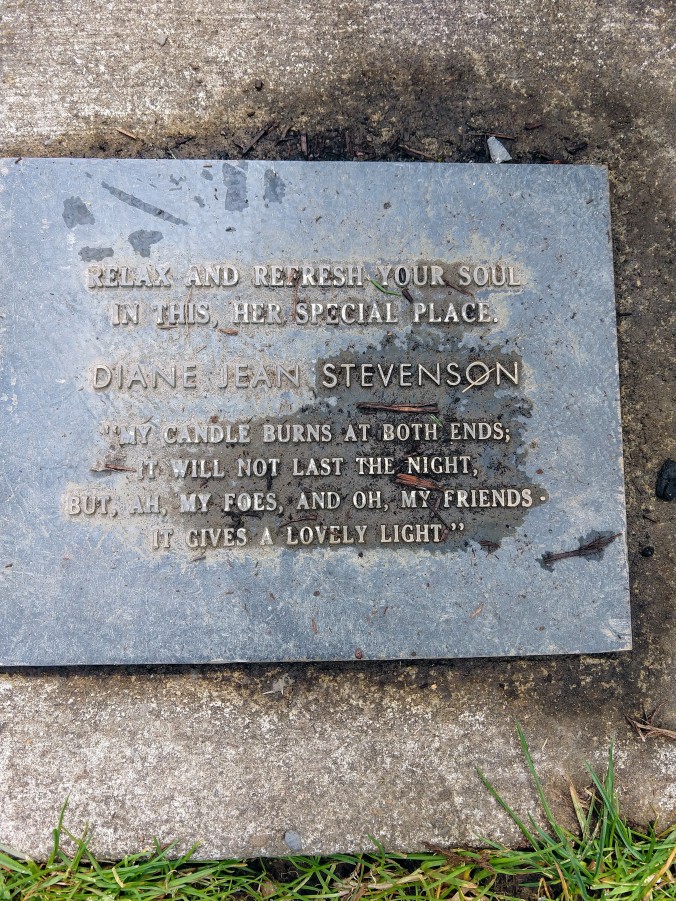 This says it all, right? First Fig, by Edna St. Vincent Millay. By the Willamette River, George Rogers Park

Work that lives beyond a death, more than just a bench. Tryon Creek State Park 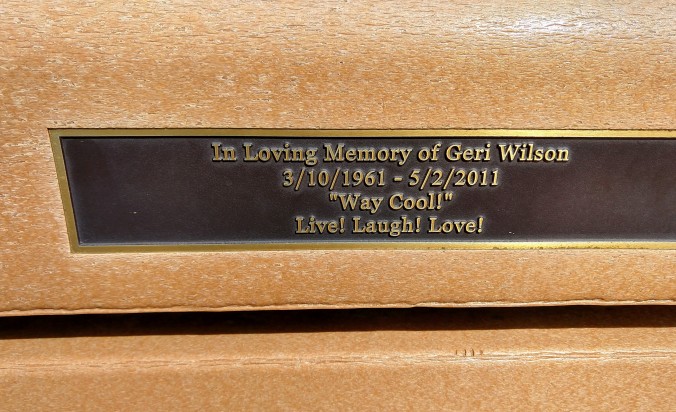 She must have been a spitfire. Cooper Mountain Nature Park

Oh James, why so young? A gorgeous poem though. Wildwood Trail, Hoyt Arboreteum

More than just a family man, whose words live on. Hoyt Arboreteum

Perhaps this is all it comes down to. Outside Shakespeare & Company, Paris

12 thoughts on “Death Don’t Have No Mercy”

Blogiversary is a Word

It’s All a Dream We Dreamed

Death Don’t Have No Mercy