Forest or water, shade or open sun, secluded or urban, steep or flat, long or short, dirt or paved? What sort of hike fits my mood, what will bring a mental health break from the world of woe. It was early June, and we looked for something not-too-distant. Featuring water is always nice! Macleay Park and trail were a match, but I didn’t realize that we’d also be stepping into a place full of sordid history, urban legend, and modern folklore, or that I’d spend several days tracking down the ‘true’ stories to satisfy my curiosity.

But first, we had a nice little hike.

The Lower Macleay trail starts at the edge of the beautiful Northwest District, a pricey Portland neighborhood, and connects to the 33 mile Wildwood Trail that extends through the entire length of Forest Park.

This area never fails to confuse me geographically. Not just because I’m gawking at the gorgeous homes precariously perched on steep hillsides. The wooded neighborhood is at the edge of an otherwise precise grid that makes up most of Portland. Here, it’s all windy roads, blind curves, steep drop-offs, roundabout routes, and circuitously meandering streets that randomly collide or dead end. No matter how many times I wander the area, I have even less understanding of where I am. The map is revealing at first, but from a car it makes little sense to me. To remedy this, I’ve resolved to walk the entire 33 mile Wildwood Trail from the top of Forest Park to the bottom, in parts – a local mini-Camino de Santiago.

Macleay is a very accessible park, with trailheads starting from several spots. The path was well traveled on this weekday afternoon with teenagers, families, couples, exercisers, and plenty of young adults. Notable to me was how wonderfully diverse the walkers were, people of all colors and ages, so unusual in a city that’s over 70% Caucasian, and certainly higher in this part of the city. It was in contrast to the night before at a singer-songwriter concert, where I noticed how completely white it was, and mostly older folks. You just never know what you’re going to get in this city. 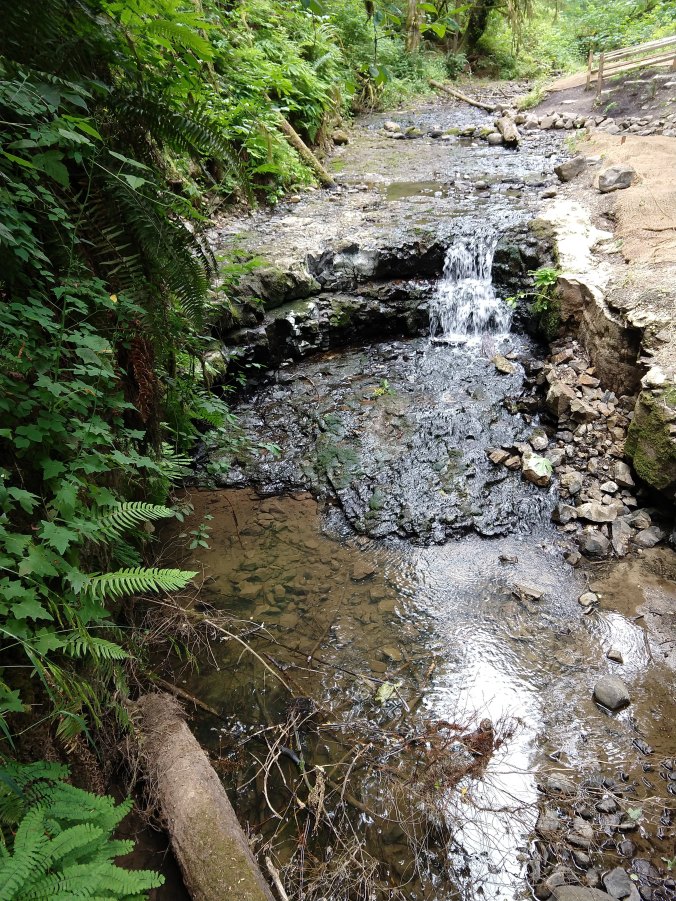 Can you hear it?

A forest denizen, surrounded either to protect or fence him in.

But I was there to immerse myself in the forest, walk alongside a creek, listen to bird song, breathe fresh air, and get my body going. It’s been a long spring of nursing wounds and being sluggish, and I was determined to get out most days.

Macleay Park was donated to the city by a Scottish-Canadian businessman who is not much of a noteworthy or controversial character. It’s said (perhaps a euphemism for “we don’t really know”) that he complained about the high property taxes, saying he’d rather donate the land for a city park than pay so much tax. The Assessor said, “Well, then, why don’t you?” Three days later, he did.

Far more interesting players were the first settlers on the property. Danford Balch and his wife Mary Jane came to Portland in 1847 in a covered wagon on the Oregon Trail. They claimed several hundred acres, now prime Northwest District and Forest Park, and built a homestead amidst the dense forest. The Balches eventually had nine kids. When the oldest, Anna, was 16, she and the hired man, Mortimer Stump, fell in love. Stump asked for Anna’s hand and Balch angrily refused and fired him. The couple eloped and settled with the Stump family across the Willamette River.

A murderer and a drunk, but he gets a historic marker.

Balch was reportedly heartbroken over the loss of his daughter. He fell into a rage, not eating or sleeping, but drinking quite a bit. A few days later he saw the Stump clan as they came into town for supplies, and they argued. According to Balch, Mortimer’s father Cuthbert (don’t you love these names?), “cursed a good deal and said I was making a great fuss about my child; that she was an ordinary little bitch, and did not know what hell I wanted of her.” Balch drunkenly threatened to kill Mortimer, and returned home for his shotgun. He found them on the mule-powered* Stark Street Ferry returning home, and “accidentally” shot Mortimer in the face. His plan, he said, was merely to take his daughter back, and didn’t know how the gun went off. He was hung in the “first legal hanging” in Portland.

Much to some people’s horror, Anna was among the hundreds of people who came to witness the hanging. What teenage daughter wouldn’t hate her father for refusing her joy and then killing her husband? But the Oregonian editor wrote: “The idea of a daughter, by her own volition, attending the execution of a father upon a gallows, is a disgrace to the intelligence of the age, and to every principle of filial affection manifested or exhibited by every species of the brute creation, in the sea or upon the earth. This fact is of a character that we cannot pass unnoticed, and must meet with the surprise, reprobation and detestation of the whole community.”

But back to 21st century madness and my ongoing attempts to escape from it.

Our out and back hike through the lush forest paralleled the creek, lovely and simple, a few riffles over rocks and fallen trees, the comforting sound of water along with continuous birdsong. A Barred Owl watched us from a branch and then silently flew away. Many trees had fallen spectacularly, ripping out enormous roots and shattering their huge trunks, creating a grid of horizontal lines amongst the vertical trees, mostly Douglas fir and maple. I didn’t read until after the hike that we passed the tallest tree in Portland, a 242-foot tall Douglas fir.

Wish I’d been witness to this crash 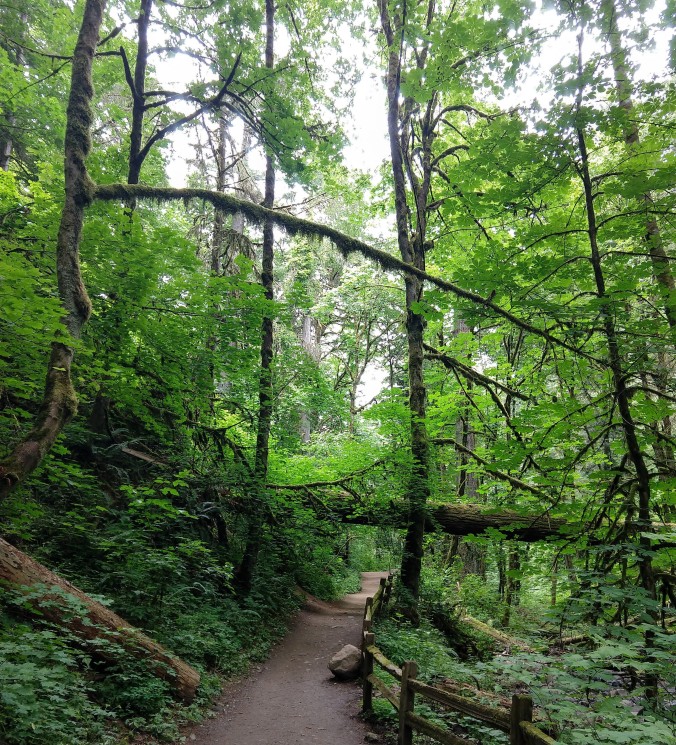 We came upon The Stone House, known locally as “Witch’s Castle.” Stories still circulate about ghostly appearances, paranormal events, hauntings by Balch’s wife, that Balch was hung there, or that it was the Balch house ruins.

The truth is, it was built in 1929 by the city as a restroom!** The big 1962 Columbus Day storm took out the water pipes and it was then decommissioned. Now covered in moss and graffiti, it’s popular among partying teens, climbing kids, pagan ritualists, and photographers. The 2015 storms (hey I survived that one!) further damaged the building, and a tree lies across the steps, creating an extra challenge, and children scrambled around in a mix of fear and glee. 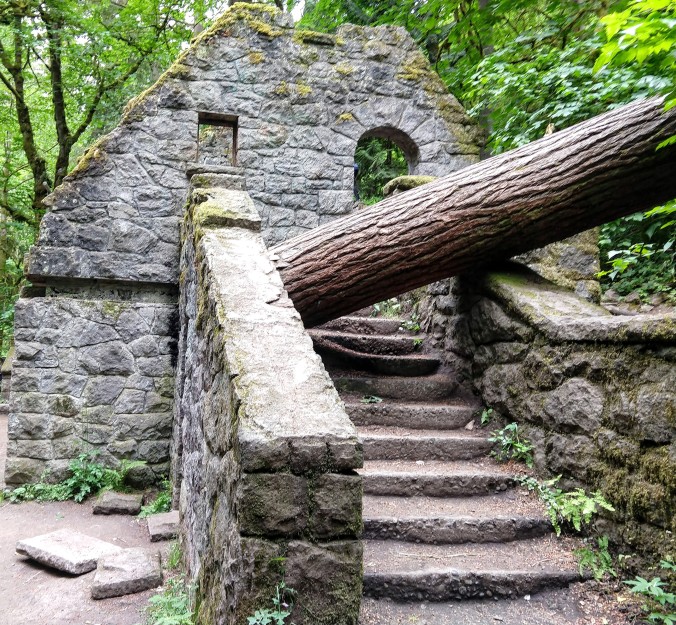 The forest at work

The trail included some mysterious local art and nerd humor, rounding out the entertainment value of what I thought would be a simple walk in the woods. 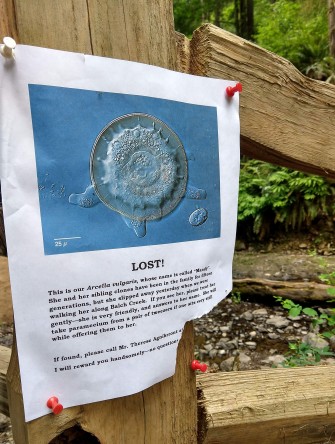 Random notice about a lost paramecium

* the mule was on a treadmill that turned a side wheel

** The Oregonian reported how the building site was “entirely inaccessible for truck, sled or packhorse,” and stone (brought in from Rocky Butte on the eastside), timbers and steel were lowered into the canyon in large wooden baskets from a high line on the road above.

6 thoughts on “A Walk In a Park and a Hanging”