After a fun weekend with a houseful of family, I wanted to get out on the trail for something peaceful. I try to balance out intense social time – no matter how pleasant – with some solitude, preferably in nature. We call it “zero setting,” as in re-setting a tape recorder counter to 000 to mark a new starting point. Archaic, and perhaps thought-of-while-high, but useful.

I say goodbye to my guests and negotiate my way out of the airport maze. Using the law of inertia as a force for good, I stay in motion while already rolling north, on the path of least resistance. City and traffic fall away behind me like a door slamming shut, and I follow serendipity and my breath, immediately calm. It is the ONE sunny day between the previous week of record breaking rainfall and a predicted week of more steady rain to come. 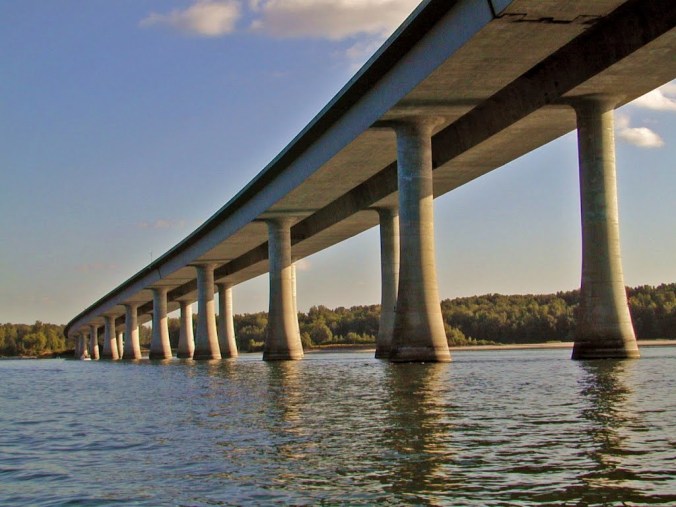 This might be the prettiest view of the bridge credit: J. Nieland

The Columbia River rises up to greet me, and I’m on Washington’s doorstep. I flow into another state, literally and figuratively, over the bridge crossing the Columbia River. Officially it’s the Glenn L. Jackson Bridge (“Mr. Oregon”), but more commonly called “the 205 bridge.” With a generous eight lanes across, plus a bike and pedestrian lane going up the middle, there’s time and space to appreciate the two mile crossing. Finished in 1982 “after nearly 30 years of planning, building and occasional bickering,” it’s a pleasant alternative to the aging, traffic-laden I-5 crossing to the west, its problems compounded by a traffic-stopping drawbridge. The 205 bridge isn’t especially noteworthy in itself. Built in concrete sections, wide and flat like a highway, its beauty lies in the spectacular views of the river and horizons in all directions. 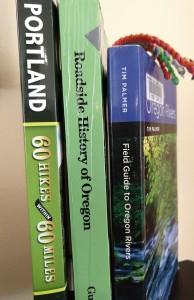 I have time for this now!

The Cascades are off to the east and today Mt. Hood is shrouded in mist. However, on a clear day, the snow-covered peak soars majestically with dramatic cloud shadows or brilliant reflected sunshine. The bridge passes over and through the perplexingly unreachable, mysteriously named, Government Island that sits mid-river between the two states. For years I’ve wondered about this place tantalizing me with its tableau of tree-covered beauty. There are no routes or signs onto the island, nothing obvious to explain what it is. But the great thing about writing a blog (when retired) is now I can take the time to follow up on my curiosity and musings. As I think about combining words and world, I use the library for its wealth of local history and color, and the internet for its endless rabbit holes, dead-ends, and lengthy answers. The two weave together a story that helps me understand the mysteries of the world, and my place in it. 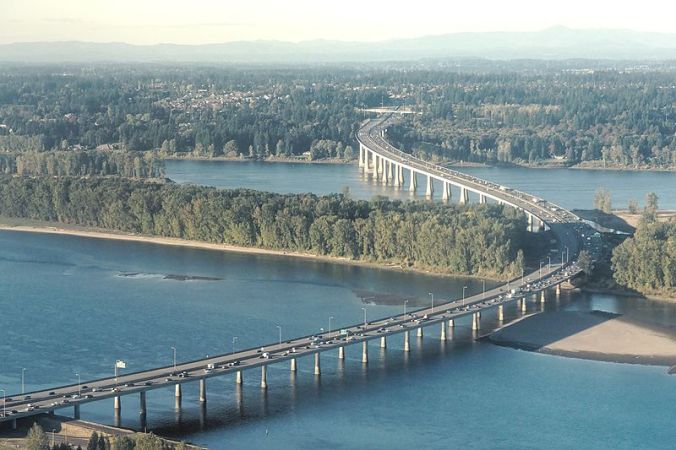 The name Government Island doesn’t refer to any nefarious federal business as I thought, no spy machinery, no mind-control conspiracy. The island was bought in 1850 to grow hay for military horses, simple as that. Though it had other more interesting names (Diamond, Goose Grass), and had a variety of owners and uses, somehow this is the one that stuck. Sadly (for me) you can only get there by private boat. The 1,760 acres are protected by the Port of Portland to keep airport traffic unhindered, but leased to Parks & Rec for boaters and fisher-people. Sort of anticlimactic, but now I know. 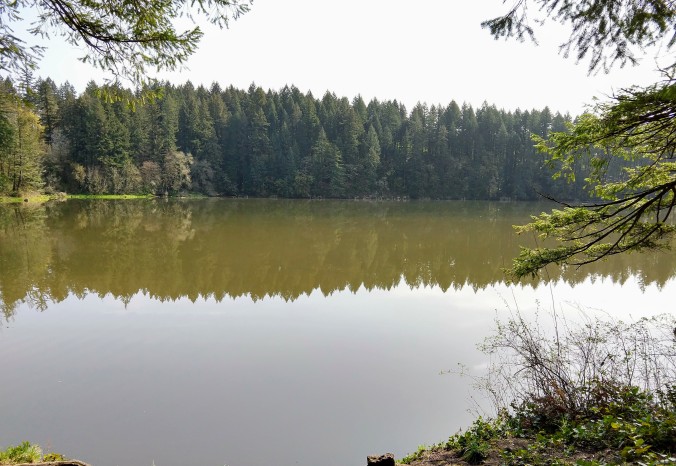 Round Lake, green and still

Exiting the bridge, I head east on Highway 14, the Lewis and Clark Highway. First built in 1905, it follows the explorers’ path and runs parallel and close to the river. Four lanes dwindle to two, lined on both sides by every possible shade of green. Early April is early Spring in the Pacific Northwest, and many trees are just starting to bud and leaf out. The palest, most delicate greens prevail. While city gardens and trees have been delightfully prodigious and brightly colored recently, I hope to find spring wildflowers blooming today.

I roll into the sleepy looking town of Camas, where everything looks neat and sweet, reminding me somehow of rural New Jersey with big trees and sprawling lawns, oversized lots, and no fences. I finish my morning coffee, still hot in my thermos, as I arrive at Lacamas Park, (rhymes with “Clackamas”) just 30 miles from home, and join the company of dog walkers, retirees, walking buddies, and joggers. It feels laid back and small town friendly.

Lacamas Creek flows through northern Washington for 12 miles into the 2.5 mile long Lacamas Lake, which then connects to the much smaller Round Lake where I begin my hike. The creek then flows from here down into the Washougal River for a short while before spilling out into the Columbia. 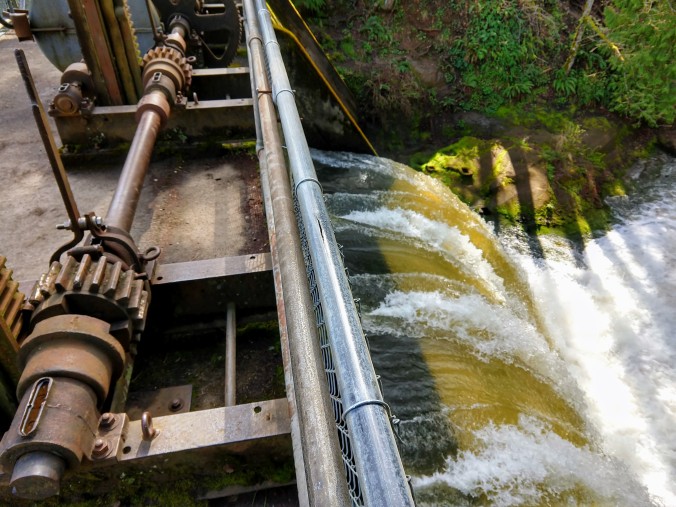 These lakes have been around for over 12,000 years, when the glacial floods at the end of the ice age changed the landscape. The water remained healthy under the stewardship of the local Native Americans, but settlers arriving in the 1800s, farmed, logged and otherwise introduced development that still continues, to the detriment of the water’s health. Both lakes are eutrophic, with algae and oxygen deprivation creating the cloudy, opaque green water I see. The lakes are stocked with fish every year, but what doesn’t get caught also doesn’t survive the year. While swimming is allowed, I’m not so sure I’d jump in. 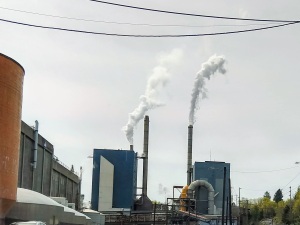 Camas industries on the shores of the Columbia

I walk across a couple dams, and water rages noisily through the gates beneath my feet. The original dams were built in the 1880s by Henry Pittock who built the town so he could have a paper mill. (He’s the newspaper guy whose Portland mansion overlooking the city you’ve probably visited). Reading about how Camas went from a town built to support a mill to today’s city with multiple industries, is the history of our country. Chinese laborers built a 7000 foot aqueduct down to the mill on the Columbia, and is still in use. Over the past 136 years, the small mill grew into an international corporation, owned by Crown, then Zellerbach, then Georgia Pacific and Koch Industries, all from a little mill started by the publisher of a weekly paper. 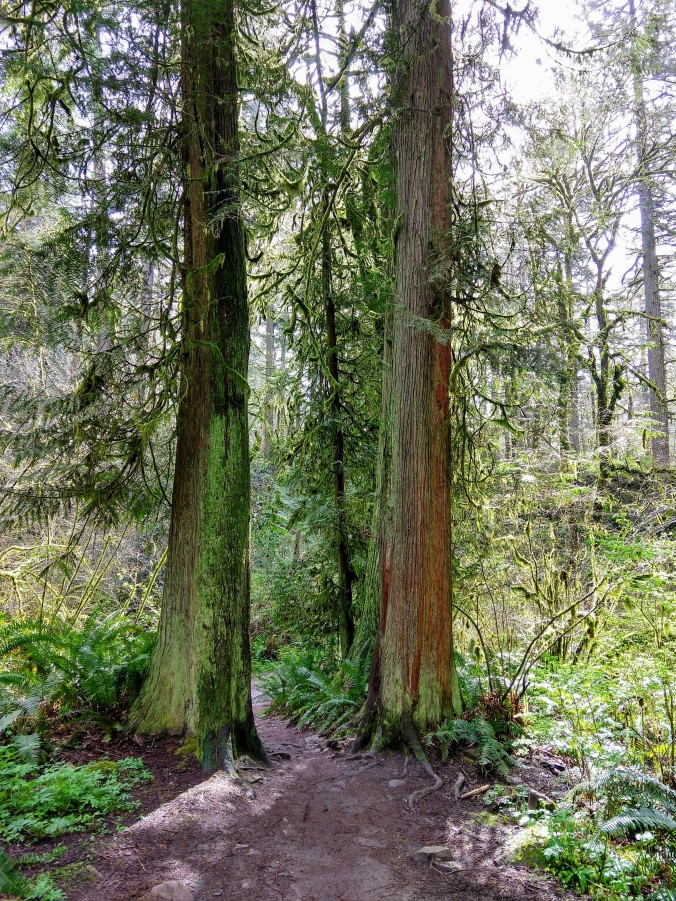 “Between every two pine trees there is a door leading to a new way of life.” –John Muir

I strike out onto a trail following the wild rushing creek, over and past several waterfalls. The sheer exuberance and thunderous crashing of water displaces thought, feeling, and tiredness; nothing else can go on in my brain, and the ground’s vibrations move right through me. If it takes a long winter of rainy days to create this spectacle, I can’t complain. It’s the reward for sustaining faith through the gray winter and endless rain. 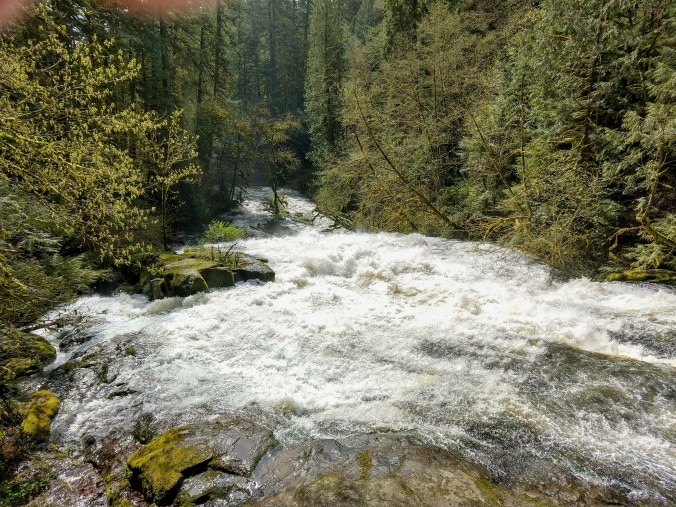 Lacamas Creek under the suspension bridge

The twisting trails range from wide gravel roads to narrow rocky or muddy footpaths. For an urban park, it still has a wilderness feel. I go from falls to falls, and stand alone on a suspension bridge while water tumbles underneath, towering trees rising up on all sides. The larger Lacamas Creek is fed by several lovely smaller streams and rivulets, which suddenly pale in comparison. How much beauty can we appreciate at once? Perhaps there are limits or saturation points. 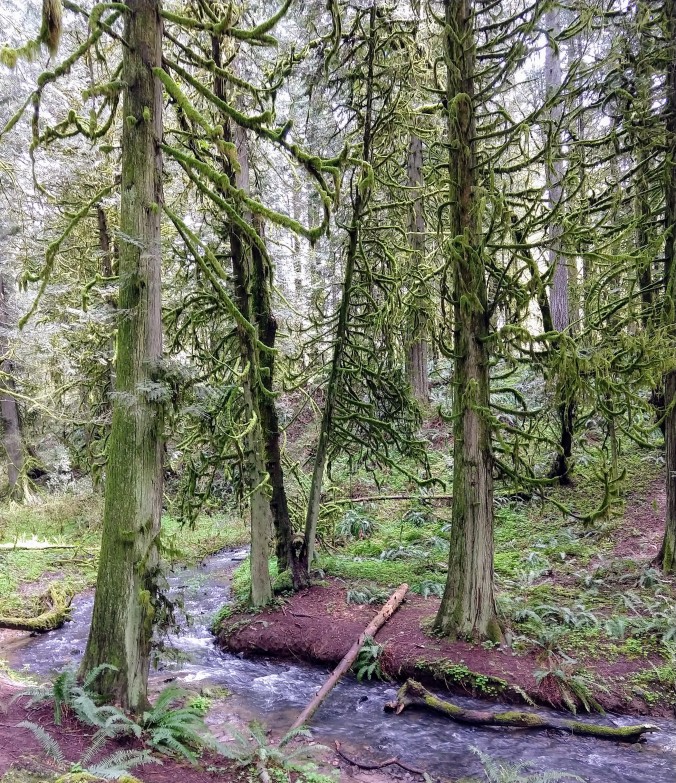 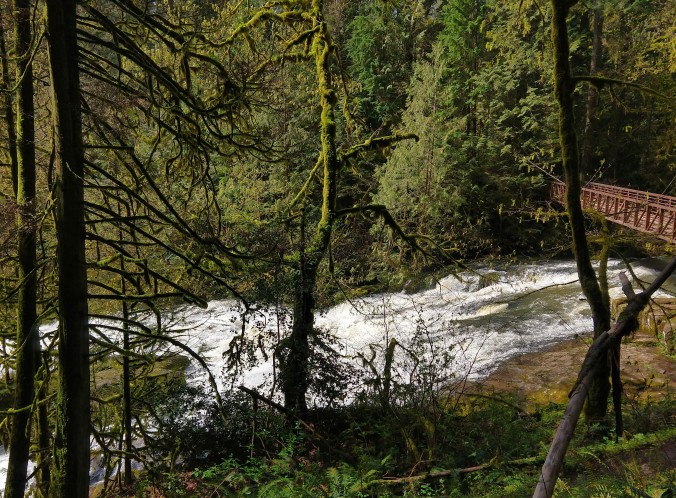 The warren of hilly trails has confusing odd turns that divide and rejoin each other further along. Signs are few, but passing hikers happily describe the steep and the narrow, the rewards or challenges of various paths, the seasonal changes, the waterfalls and bridges. They are clearly in love with their park, and it becomes obvious that I can’t really make a wrong turn. Maybe getting off the main route is the whole point. 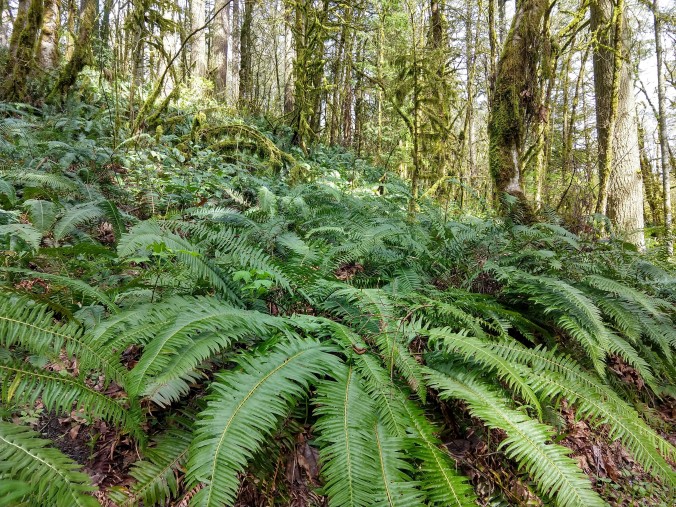 The ferns are enormous, covering entire hillsides, even sprouting from tree trunks and branches. A family collects Fiddlehead ferns for some culinary project. A couple chase a toddler freed from his stroller, red hair glowing in the sunshine. I run into someone I know, and I feel like I belong. I gleefully take my sweatshirt off as the day heats up, into the 60s for the first time in forever (and sadly, it turns out, the last time for a while). The sun feels extraordinarily amazing – there are not enough superlatives for how this feels, a perfect storm of sunshine between the rains. 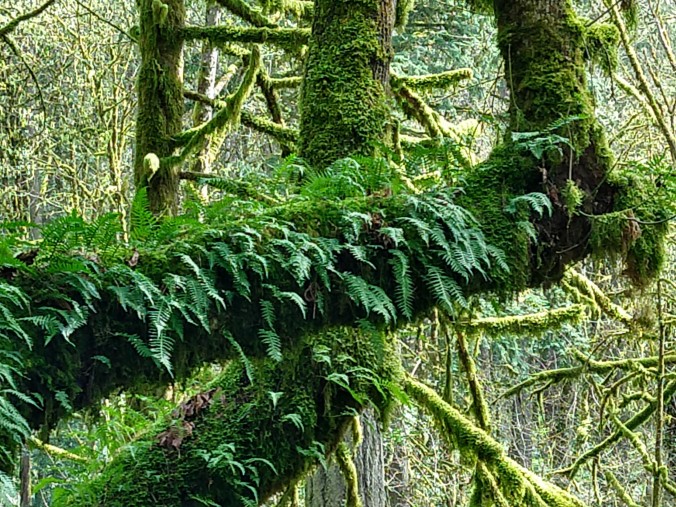 Ferns even grow on trees and rocks

I detour off the main path to explore the Camas Lily Field. The lilies are native, wild and abundant in the PNW, widely used by Indians for medicine and food. I’m apparently a bit on the early side, and the wide swath of closed buds just hint at potential beauty. I vow to return when they’re in full bloom, and even infuse our garden with the Spring purple. 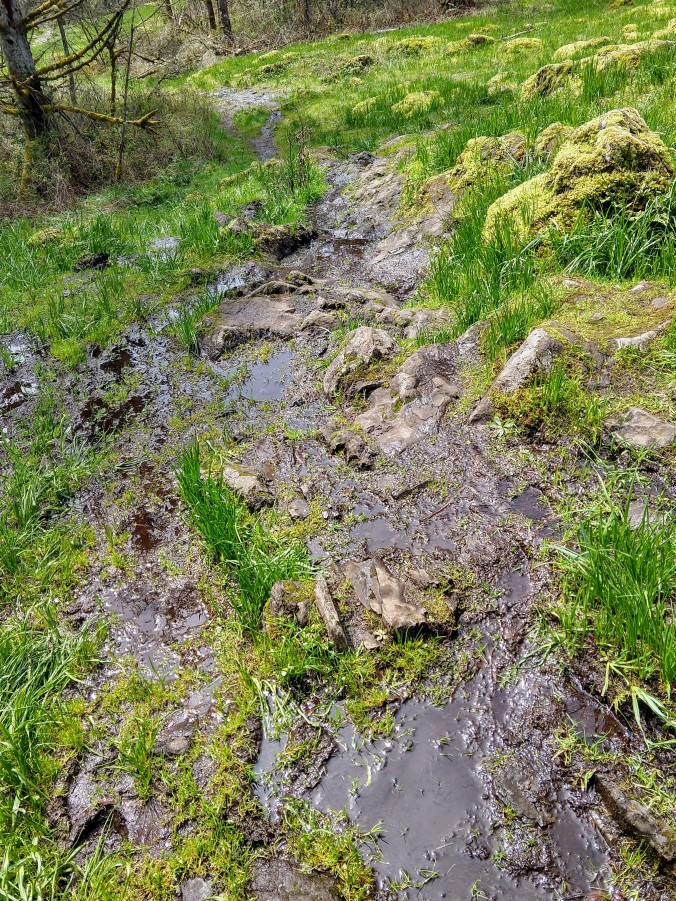 A rocky springtime trail in the Camas field

Happily, a few other wildflowers are in bloom – white Trilliums popping out from a tri-leaf base, bright red Salmonberry flowers on their prickly vines, and low, small purple and white flowers dot the paths as well (which I later look up to ID). Welcoming my first hint of the wild spring to come, I’ve zero set myself, ready for the next visitors, the next adventures. 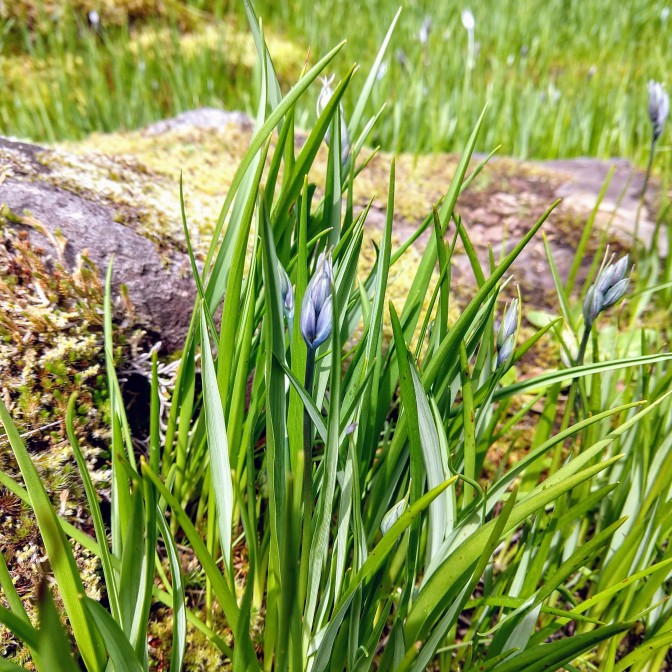 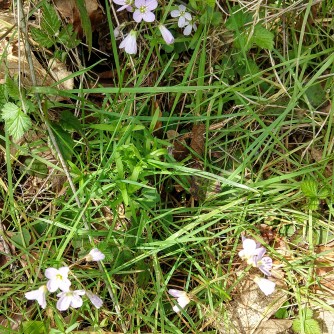 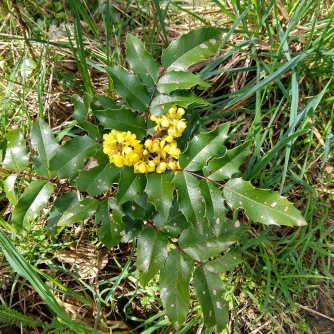 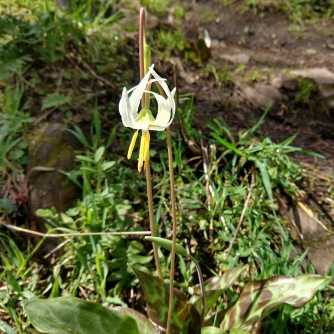 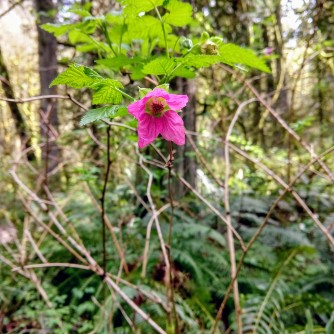 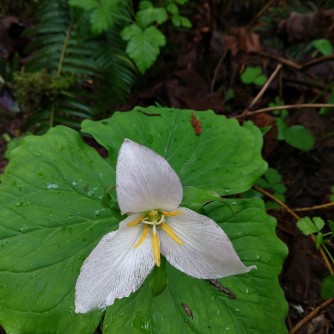 [mouse over for flower names]

4 thoughts on “Another State”