After many years of living in one town and one state, I had my favorites places to go, and only occasionally sought out new destinations. But now as I negotiate a new life in a new place I’m curious about it all; how the rivers and mountains formed, who once dwelt here, how places were transformed over time and by whom, and how they became what they are today.

My Highway 30 drive along the Columbia River

This winter I caught everyone’s colds, and it stole away my enthusiasm for the outdoors. Now on the mend, I am done with navel gazing, and a confluence of factors get me up and out. Spring unfolds out my window – blossoms, budding trees, mating birds, the works. A break in the storms, a prediction of “mostly cloudy” means perfect driving weather. I’ve been reading some Columbia River history, inspiring me to see more for myself. I have an undiscovered city, time on my hands, and I’m ready to be an exploring party of one, searching out places of beauty, discovering new-to-me history and stories. Sometimes a long lonely day is just what I need to level up in thinking, feeling, and learning.

I drive out to beautiful Skyline Blvd, winding through forested hills past Washington Park, then alongside the eight mile long Forest Park, looming a thousand feet above the Willamette River. The road is dotted with multi-million dollar mansions on large hillside parcels, and I catch occasional glimpses of the stunning valley beyond.

The path to the Willamette Stone

Driving alone, I can make frequent unplanned stops when something curious catches my attention without annoying any passengers. First up is a historical marker for “The Willamette Stone.” A short path through some woods leads me to the spot surveyors chose in 1851, marking the exact place from where all land parcels were measured, going east-west from Idaho to the Pacific, and north-south from Canada to California. I don’t know how they picked this singular point on this tree-covered hillside, but it was the basis for deciding the boundaries of all the townships and lots given to early settlers coming to seek their fortune. Major land decisions were based upon one tiny, unique spot, underlining the random way time, place, luck, and circumstance all come together to create something that still influences where we live 170 years later. An enormous cell tower and a few huge satellite dishes stand nearby as a testament to the progress of time. 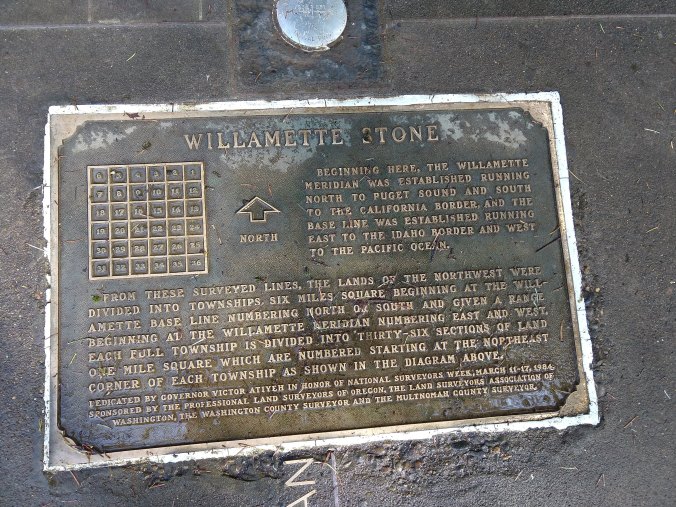 The vistas from Skyline encompass a wide swath of the Willamette Valley and the coast range to the southwest, but trees block the views along the curvy road. I stop at a deserted cemetery perched on a hillside open to the countryside below to take in the panorama laid before me.

To cross the mile-wide Forest Park over to Highway 30, I turn onto Germantown Road. I recently read about its rugged beauty, but had only passed the sign, never turning in. The twisty road descends to the river, passing trailheads leading into the 5000 acre park, and the densely forested edges hide untold secrets beyond the road. “Later,” I promise, my lungs still feeling the effects of my latest cold, and drive on.

I immediately take another detour over a short bridge leading to Sauvie Island, which sits at the confluence of the Willamette and Columbia Rivers. My previous visits hadn’t gone much beyond July berry picking trips, so I decide to follow the water’s edge and see what else the island has to offer. Nothing makes me feel better than to surround myself with water, and as “partly cloudy” turns to fog, rain, and mist with occasional downpours, I have falling water above, swampy water beneath, and river water all around. It’s more than I could ask for.

River traffic on the Columbia

Eons of flooding and subsiding created a lush paradise that is now fertile farmland, a wildlife refuge and grazing lands. Much of the 26,000 acres is marshy waterways, ponds, and lakes. The Multnomah Chinook Indians once thrived here, but they welcomed explorers and soon died away, leaving little behind. Same sad story as everywhere else in Oregon. Later, a dairyman named Sauvé arrived with 400 head of cattle that he transported from Washington by having them SWIM across the Columbia! Definitely old school. More settlers came to get their 640 acre land grants of rich soil, and built dikes to keep away the incessant flooding. 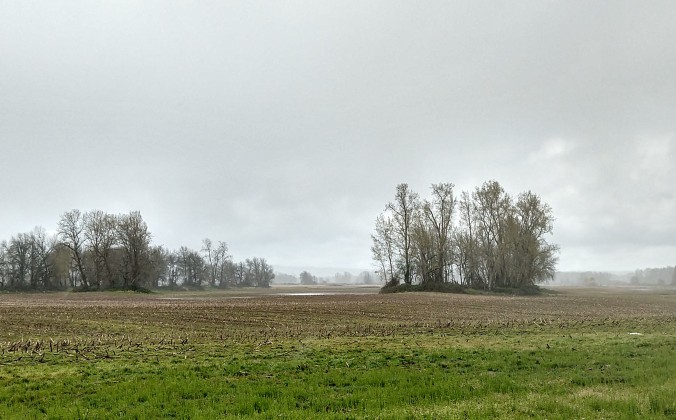 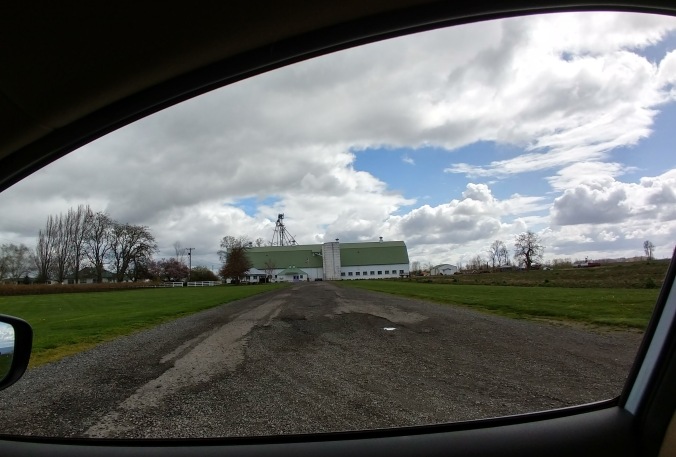 An impressive barn, and continually shifting weather patterns here on the Columbia

I make brief dashes from the car to see over a dike to the river, over a dike to check out vast brilliant green grazing lands and hardy cattle, or over a dike to admire the marshy waterways and herons, returning soaked each time. I slam on the brakes when a half dozen sheep and lambs come running around a bend in the road, followed later by their shepherd. The enormous barns are beautiful and impressive in their size, ranging from new and modern to weather beaten and stoved in. The cattle are woolly and wild, the ducks and geese are huge, and the wet, rural ambience makes its way right into the car. A few stalwart fisher-people stand on the shoreline or in boats mid-river, and a hardy but wet bicyclist makes his way around the flat island roads. Note to self: I want to do that. After the rain.

Fishing on the Columbia, Washington on the far side 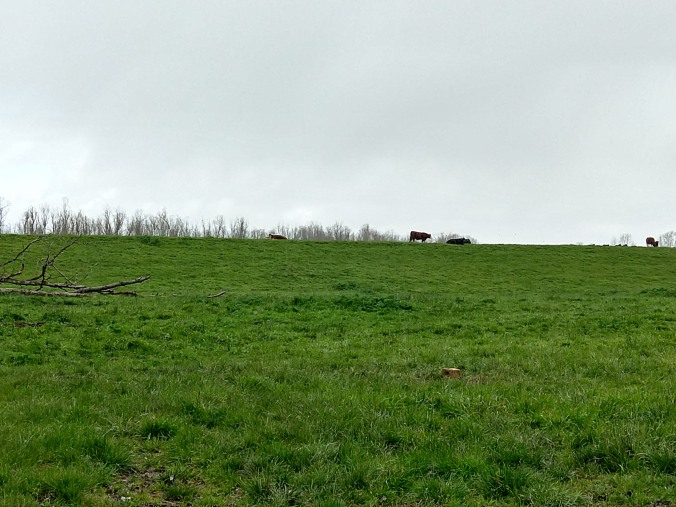 Grazing lands, a contrast in color

Sauvie Island Wildlife Area provides both habitat protection and a public hunting area. Not sure how that works.

The island’s western shore (away from the Columbia) is a narrow channel of the Willamette River, and in 1950 a bridge was built from the Portland side, eliminating the need for a ferry. Just 10 miles north of downtown Portland, the island attracts many visitors. Parking permits and recent no-alcohol rules help cut down on DUIs as well as BUIs and SUIs (boating and swimming). But on this rainy April day, it’s lonely and lovely, and I’m mostly by myself.

A lovely description of the present day island

Back across the bridge heading north, Highway 30 is a strange mix; an impenetrable forest is on my left and the wide rolling river is on my right, with river-related industry and small manufacturing businesses wedged in. I associate river and forest with pure nature and beauty, but people have to work, things need to be made, and when you have forest and river everywhere, the not-so-beautiful things have to go somewhere. It isn’t the picturesque highway that runs through the Gorge to the east, but it has its own beauty.

As I enter Columbia County, the river courses along near the road, interspersed with marshes, rivulets, ponds, herons, and commercial and residential structures. I quickly enter and leave the tiny towns of Scappoose, St. Helens, Columbia City, Rainier. I’ve heard these names mentioned in passing, and now I can have more intelligent conversations about their whereabouts, their ambience. Mostly I just like saying Scappoose.

There goes a ship

At home in my urban/suburban surroundings I’m many steps away from the world of big commerce. All the material goods I could possibly want and need (and more) are available behind a counter, or magically delivered to my doorstep with the push of a button. Now I’m rolling along on a road jammed with trucks large and small, carrying mysterious goods brought by huge ships from all over the world. From my tiny perspective, a speck on the shore, it seems miraculous that this river is deep and wide enough for these larger-than-life sized ships to navigate and pass through easily. I enjoy watching it all go by at great speed.

Lewis & Clark Bridge and Longview, WA from Rainier, OR

My final stop is the Lewis & Clark Bridge, a 1.5 mile long cantilever bridge connecting Oregon with Washington. Enormous steel beams loom and flash overhead in a miracle of engineering, soaring high over enormous ships as they pass underneath on their way from the Pacific Ocean to the Port of Portland. Built in 1930, it was designed by Joseph Strauss, who also designed the Golden Gate Bridge! I drive across and back, wishing there were walkways to linger over the striking views of two shores, two states, and river life in between. But the narrow bridge is crowded with logging and container trucks, as well as commuters and tourists, and sightseeing isn’t possible.

Lumber sorting yard in Longview (from the internet)

On the east side of this magnificent bridge, Longview, Washington looks like an industrial wasteland (or wonderland, depending on your perspective), a swath of sawmills and lumber yards, enormous piles of trees in various stages of deconstruction: poles, boards and sawdust. Manufacturing and shipping ventures, railroads, trains and parking lots cover the area as far as I can see. Though I’m looking right at it I can barely grasp this vast expanse of raw wood, poised to be shipped, railroaded or trucked to the world beyond. You wouldn’t guess that the logging industry is in decline here. I turn and leave quickly, preferring the romance and beauty in water, bridges, and boats.

My 120 mile round trip adventure gives me a broader perspective on a small stretch of the 1,240 mile-long river. The Columbia has fed and supplied people for thousands of years. It has supported all kinds of river travel, from Indian canoes to settlers’ steamboats, from fishing boats to pleasure cruisers, from ferries to pilot boats, from barges to ships from afar. The river floats the imaginations and dreams of many, and I’m thrilled to be on board in their company.

2 thoughts on “Roll On Columbia”