Many years ago, when I began hormone replacement therapy, my practitioner promised that I would once again “hear the music play.” I thought, what a great metaphor for enjoying life. I knew that sensation of hair raising, goose bumpy, tear inducing awe.

When retirement came along, I wanted to likewise recapture the music, and rekindle the fire in my life. I interviewed friends and strangers about their retirement (just as people ask me about it now). What did they think, what was it like? Some compared it to vacation, others said they were bored, or encountered sudden health issues. I vowed to work toward the former of course, but didn’t know how, or what that would look like.

Three years in, I’m still making it up every day, but I’ve learned that it’s not just plummeting hormones that take away the music, nor age or illness. The notes fade when I rely on old habits, take refuge in a comfortable path, and hesitate with “no,” before proclaiming “yes!”

There’s little room for passion in a rocking chair. I have to push myself to try new things, disrupt old habits, push boundaries, and beat back fears. While it won’t keep me from dying tomorrow, it makes the days far more interesting. It may not lengthen my life, but it creates a life worth living.

Moving to a new city gave me a wide open palette for retirement, permission to create a new path. It was fairly easy at first to keep my mind alert, my heart full, my body alive, because everything was new! The longer I’m here though, the more effort it takes to explore further afield, trying things that are out of my comfort zone.

I begin new experiences with curiosity and intention – where is it, what will I see, how do I get the most out of it? I try to learn a little about an area to deepen my appreciation and enjoyment – flora and fauna, history, geography or architecture. But sometimes inquiry turns to trepidation: what could go wrong, will I get lost, will there be mean people, will I be too cold (or too hot), will it be too challenging?

Then feeling foolish, I put on my boots and get going. When I venture out to new places, step into the unknown, my mind expands, my heart swells, my senses are sharp, and I’m alert and watchful. There’s always something amazing, surprising, or thought provoking. Old sorrows are swept away, and I feel a new perspective about life. Music! 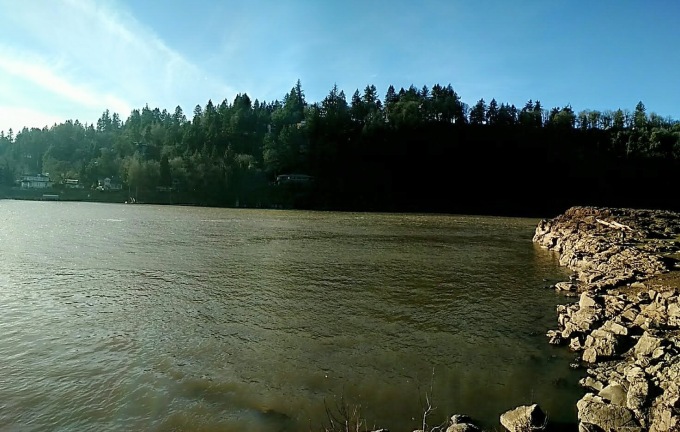 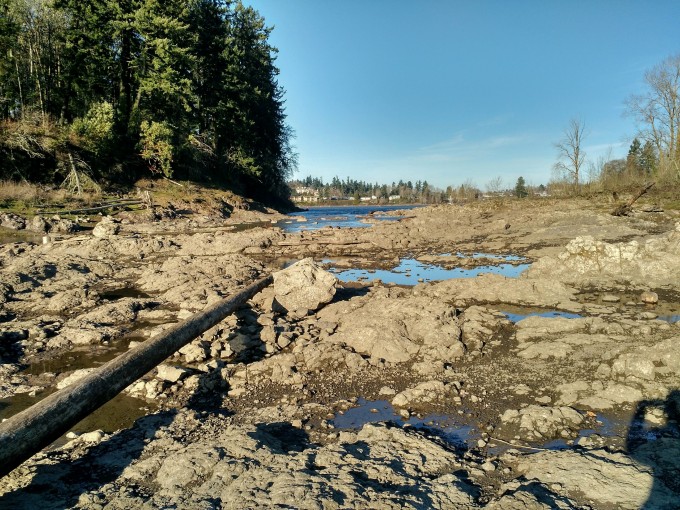 When I heard about Elk Rock Island I was hesitant, preferring the familiar and beautiful – Forest Park, the Arboretum, nearby Tryon State Park, the riverside – rather than something unknown. But this island idea intrigued me, and so I went last New Year’s Day.

When the water level of the Willamette River is low, the island connects from the jutting eastern shore via a path of stones, and is accessible even without a boat. AN ISLAND! How exquisite to not just be near the river, but surrounded by it! Formed by a volcano that erupted over 40 million years ago, the tiny 13 acre island is the oldest spot in Portland. 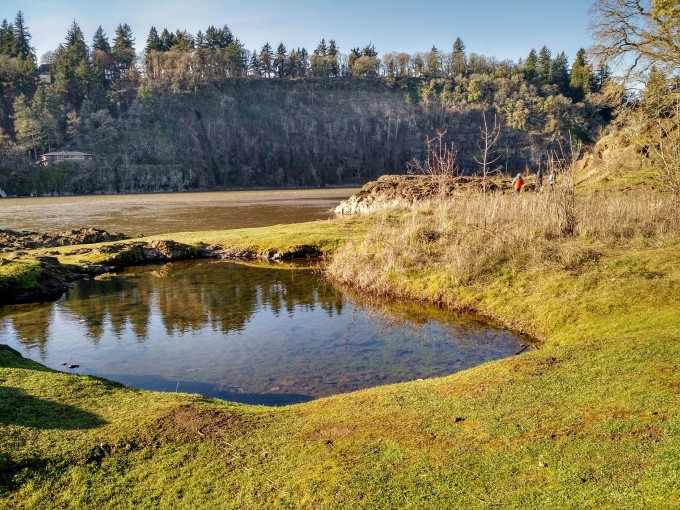 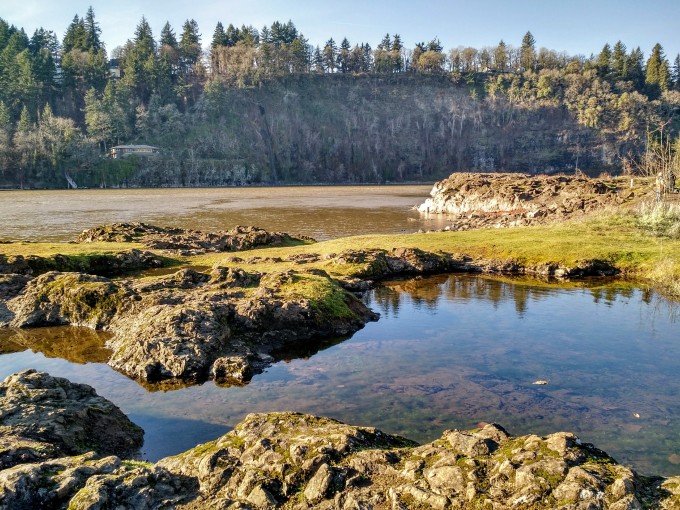 Under brilliant sunshine and a cold blue sky, I scrambled over the island’s craggy boulders, moss-covered and a dazzling green, dotted with clear vernal pools. Cliffs rose straight up on the western river shore, and seabirds wheeled along the water’s surface and overhead. Whipped by freezing wind, I found myself chanting, “Scotland! Scotland!” It made no sense, having never been there, but I laughed and felt thrilled at what seemed like a bit of Scotland just 10 miles from home. 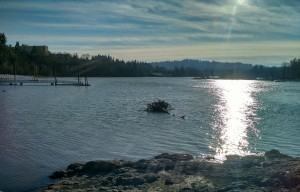 I walked along the island’s outer skirt of stark rough basalt rock, crouching down by the pools and peering in. Missing my ocean tidepools, I had hoped to see some of the amphibian river creatures that supposedly hang out there, but saw none. The low winter sun reflected too brightly on the water’s southwestern surface, blinding me to everything in that direction, so I continued northward along the riverside. The water changed color and texture as it flowed toward downtown Portland in the distance. A lone speed boat passed, causing raucous waves on the otherwise quiet shoreline. 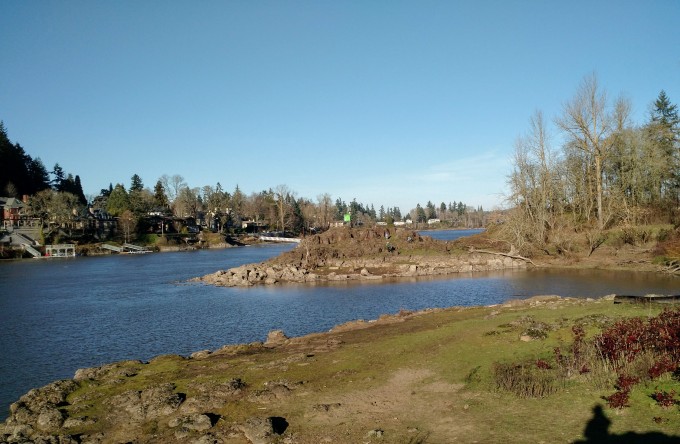 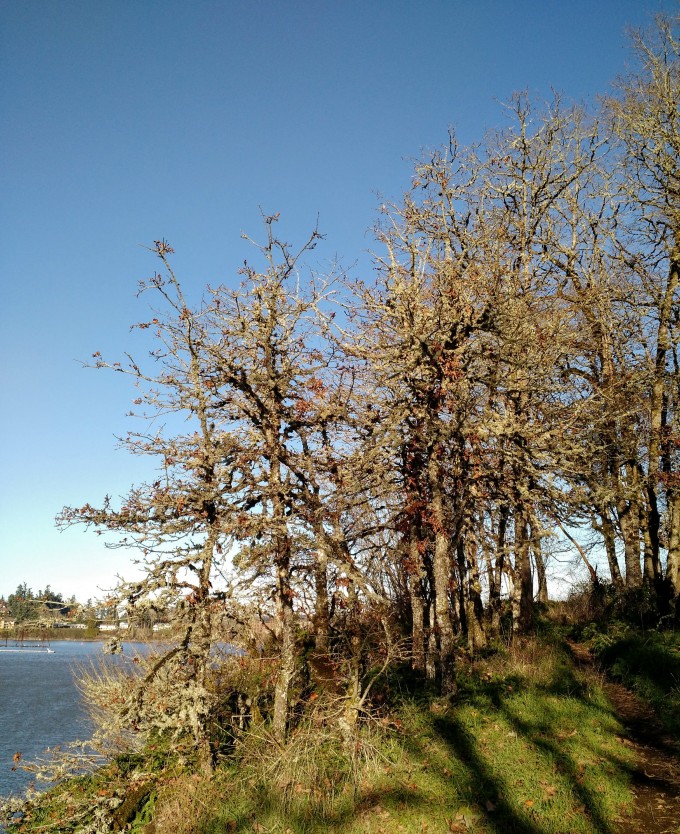 Heading uphill to the island’s interior, I followed faint trails through a variety of trees and plants, some familiar, and plenty that were not. As I rounded the island’s northern tip, the view revealed what’s invisible from the road, the river’s eastern shore rising gently from the water’s edge, leading to wide green lawns, and up to enormous homes tucked among trees. 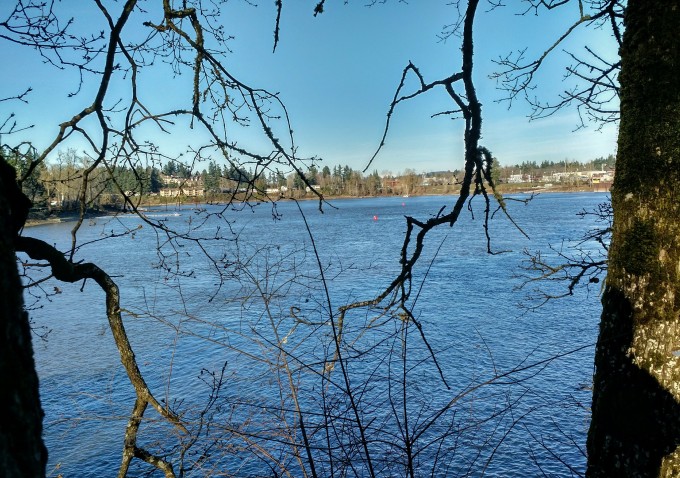 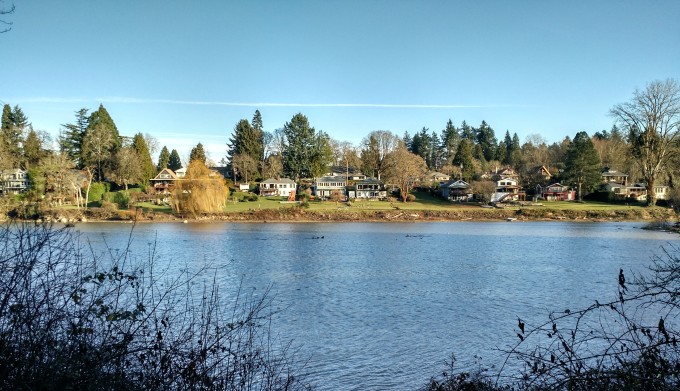 Trying something new, breaking away from habit and preconception and misconception, I’m as enthusiastic and passionate as I remember being in my more youthful days. New experiences seem to lay new neural pathways, and in those moments I gleefully commit to seeking out new territory, and challenging myself with new adventures. I made notes on more places to explore as I passed them on my way home.

Though the wind blew hard, I eventually stopped feeling the cold, and music swelled and surged with the river’s current.

8 thoughts on “Hearing the Music Again”