Looking south along the Sunset Highway

Driving west out of Portland on route 26, Sunset Highway, farmlands taper off, and forests grow dense, expanding into the open space. I feel an inexorable draw toward the coast while on this road, because if you continue straight you arrive at Seaside. Veer southwest on highway 6, there’s Tillamook. Or head northwest on 47, Nehalem Highway,  and you come to Astoria. But today is a different sort of adventure. 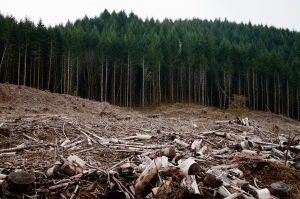 We pass Banks and Mountaindale, pass Manning and Buxton, and also several clear cut forest hillsides. The stark slopes rise up decimated and barren, strewn trunks and branches left in a giant trash heap on the ex-forest floor. The gaping wounds are a battlefield where all was lost, a neglected cemetery.

These sad commercially-owned memorials to our bottomless need for houses and paper stand witness while we ignore the effects on habitat, erosion, water cycle, climate change, and really, the entire ecosystem. In spite of replanting efforts, the cycle continues, and generations of harm cover the area, rippling outward toward the people and animals who live here.

But happily on this day, I learn that there are creative people with better ideas working on solutions. 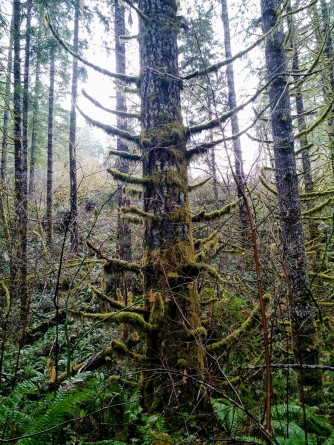 Driving through dense forests, we turn in at a mailbox marking a narrow driveway, as if it’s just another home on a road. I glumly don rain pants and jacket, hat, scarf, gloves, not so sure about tromping through the woods in the cold falling rain. A short walk down a gravel path opens up to a small paradise, a happier looking woods, in stark contrast to those clear-cut forests we passed. Tucked alongside the Tillamook State Forest, Hyla Woods is densely green and alive, and I am immediately appreciative for the work that goes on in this small demonstration forest.

A little ways from the cabin sits an impossible looking treehouse, occupancy limited to 4.

As we come upon a few outbuildings, a fire pit, and a cozy cabin, a small group of people and an enormous pot of chili and fixings await on the front porch, gathering us in, warming us as we gear up for a soggy slog into the woods. (Can you tell I’m not an Oregonian?) We are all here to celebrate and honor the annual return of the Coho Salmon to the stream where they were born.

Happily, the rain slows to a drip, but the paths are muddy, and recently fallen leaves have turned the trails to a sodden, slippery mess. I hope to not embarrass myself and slip in the mud as I follow others’ deep footprints. They lead us along the Lousignont Creek (named for a mid-19th century settler), and we search the shallow, clear stream for the Coho as they struggle upstream in order to spawn and die.

While still in the process of recovering from its own history of misuse and decay, this forest has had time to repair some of its wounds with help from its stewards, our new friends Peter and Pam. Their small family-owned forest sets an example of sustainable forestry practices. They strive to be profitable even as they support the ecologically complex environment. They harvest trees individually, sell wood milled in the forest, and dried in a solar kiln. What if they could actually eliminate clear cutting? A hopeful, stunning thought.

Other activities go on in this forest as well – restoring the creek habitat, tracking the beavers’ comings and goings, recording the presence of various bird species, observing visits from migrating wildlife, and in general serving as a protectors and stewards of a whole ecosystem. Birders come to watch and listen, naturalists visit to study, school groups come for tours, consumers select lumber, and we, the musician friends, come to join them in paying respects to the salmon as they fulfill their destiny. 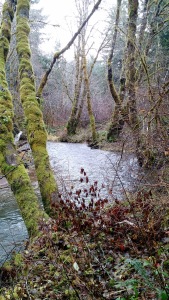 The gathering brings together people we don’t generally meet in our little Portland world. A fish geneticist / natural history buff, a naturalist discussing the mysterious disappearance and reappearance of local beaver, a teacher explaining how his 7th graders conduct hands-on science experiments examining the health of the creek’s ecosystem, testing the water, using leaf bundles anchored in the water, and examining what has collected. Lucky kids!

The salmon, like their ancestors before them, struggle many miles from the ocean, up the Nehalem River, around the Coast Range and into this creek where they likely were born, only to reproduce and die. Though the count is low this year (it varies due to a variety of known and unknown variables), we spot a few in the calm, shallow corners. Traveling in pairs, they struggle and thrash to maintain their spot in the current, ready to create a nest, and lay eggs or fertilize them. Soon they will give up, and their remains will serve as food for nearby inhabitants and organisms. Creatures that can’t stop giving.

The feat is to me among the strangest and most mysterious processes of this strange and mysterious world; the innate urge to spawn, programmed from the beginning of time (or fish), somehow guides them in knowing what to do and when. Get this, their kidneys even transform to allow them to go from salt to freshwater beings. My favorite explanation comes from some a native story, that when maple leaves turn to yellow and fall onto the water’s surface, it may be silent to us, but is as loud as a drumbeat to the salmon downstream, calling them back to where they were born. To witness their end of all things, is rather poignant, heroic, and beautiful.

Here’s my favorite debatable factoid. Coho salmon are semelparous, meaning they give birth once before dying. (We are iteroparous, we give birth and astonishingly, keep on doing it.) The word semelparous, according to one academic, could come from semel, meaning once. Or, it could come from the mother of Dionysus, Semele, who gave birth and died. She actually was destroyed by the jealous Hera, and her husband Zeus, who seduced Semele in a mortal guise. I’m thinking she might have chimed in on #metoo had the timing been right.

Rivers, forests, and spawning fish make one feel insignificant, a small speck in an enormous universe. Perhaps that’s what brings me around to these places again and again. As we speak across the creek, raising our voices over the water’s sound, Peter points out, “Human voices have echoed over these waters for 10,000 years, and only in the last 200 years have those voices been English.”

Fare you well, fare you well
I love you more than words can tell
Listen to the river sing sweet songs
to rock my soul

One thought on “River’s Sweet Songs”