Here’s the thing about retirement. I look at the weather forecast, I look at the calendar, conclude that nothing can’t be postponed, and look for a new place to explore. 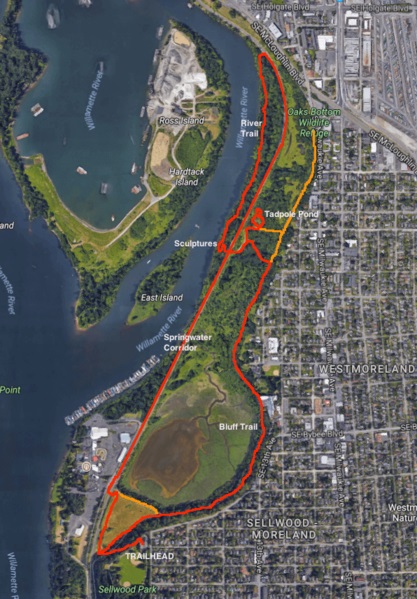 Just a few miles east over the Sellwood Bridge is Oaks Bottom Wildlife Refuge. It was a perfect recent Autumn day, half overcast, sunlight peeking through clouds onto the water, plenty of yellow leaves still clinging to branches even after the previous night’s big winds, and the fallen leaves not yet an ankle-deep morass of slippery muck.

This is my second Bottom experience, and can only assume that word has something to do with some sort of wetlands. So rare in my California experience, that I don’t even know what a Bottom is, and the internet won’t tell me much.

Looking east to the bluffs

Oaks Bottom is part of a 140 acre long, narrow park running along the east side of the Willamette River. Originally just a river bank floodplain, an early 20th century railroad divided the land, creating a wetter wetland, and attracting all sorts of wildlife. Like other natural areas around here, of course it was abused and used for sanitary fill and construction debris from the I-405 project. Also like other areas, it has a history of decades-long battles between conservationists, capitalists, and put-it-to-good-use types, with fantasies of a motocross park, museums, commercial use.

Sometimes the sun and clouds and water all working together just knock me out.

One (perhaps apocryphal) story I read was of a couple of guys going all Monkeywrench Gang on the issue. They (with a bottle of Jim Beam) posted 40 official looking signs high in the trees around the periphery that said, “Wildlife Refuge” and “City Park”. Once people began referring to it that way, there was no going back. With pressure from several organizations, the conservationists finally won. 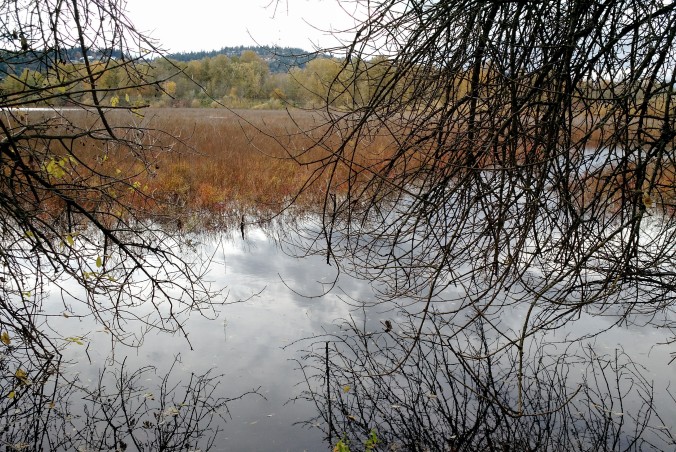 With Portland hills beyond, looking west.

The resident beavers have a good monkeywrench story as well. Water flowing into the shallow lake is controlled by wood boards that park employees occasionally move to adjust water levels, but the beavers sabotage this by moving those boards around themselves. The park folks in turn placed a perforated pipe through the beaver dam, and so it goes. People vs. Nature, mano a mano.

Ross Island, with boats anchored just outside the lagoon entrance

Along one edge of the hike is a close view of Ross Island, which I’ve usually only see from the west bank of the Willamette. This side is completely different because I can see that the island isn’t oval, as I thought, but is actually a big C-shape, with the lagoon hidden from view, accessible only by boat.

Mausoleum mural, wildlife above looking down at wildlife below

Springwater Corridor bike & walking path on one portion of the loop hike, with urban reminders

If you squint and face one direction you imagine you’re in the middle of a beautiful wooded, watery Monet painting. But turn a fraction and you see how urban this park is. The Springwater Corridor bike and walking path are part of the hike abutting one edge, along with power lines and railroad tracks. On another side is Oaks Park Amusement Park (built in 1905) with a huge parking lot and a Ferris wheel rising above nature. The downtown skyline is just across the river through the trees, shining in the sun. Looming from the cliff above is the beautiful Sellwood neighborhood and an enormous mausoleum whose vast cement walls are covered with a 40,000 square foot mural of giant herons, ducks, eagles and beavers looking down at their real life counterparts below, mano a mano. 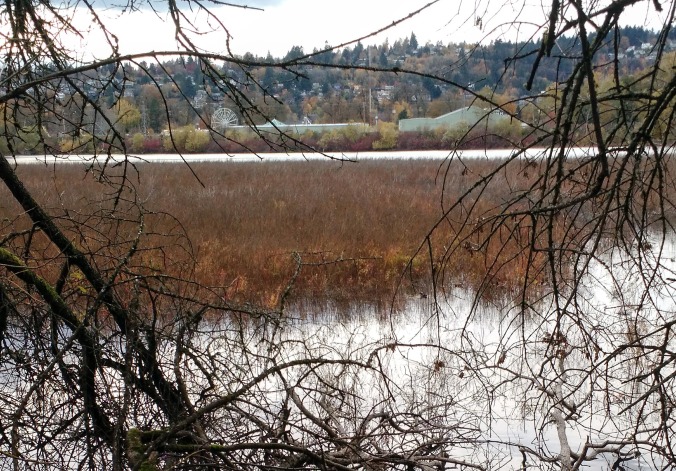 You can the Ferris Wheel across the pond, diminished by distance. Beyond are the Portland hills on the west side of the river.

Portland to the northwest, looking from the bluff at the trailhead

Sculpture garden on the riverside path

2 thoughts on “Bottom’s Up”