Big city driving is confusing, and if you don’t know where you’re going, you end up somewhere else. The complicated, unfamiliar choices come at you fast. Just trying to navigate along one side of the river, you somehow end up on a bridge to the other side. At which point there’s no turning around.

“Wait, why are we on this bridge?”
“No idea. I thought I took the right exit. How the hell do we get back to the other side?”
“No clue. Maybe turn here? No, there! Oh wait, that’s a one way street. Ack, pull over!”

My first new-resident-milestone was quickly finding my way back across a bridge, and then pretending it never happened. That was when I could finally start to fully admire all those bridges. Each time I cross one now, I fall in love with my new city a little more. 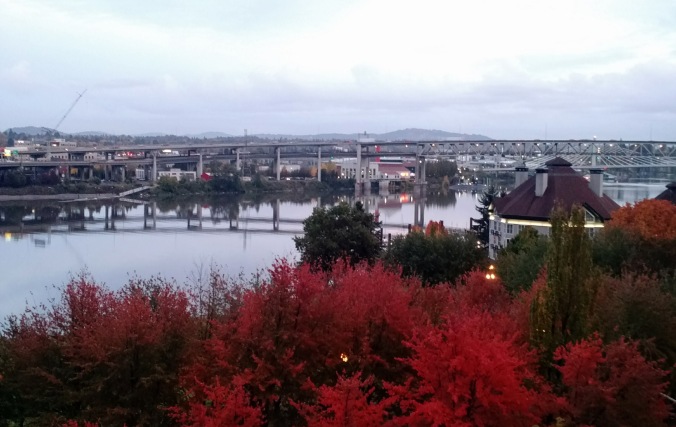 The Marquam Bridge looking southeast from a downtown hotel

By choosing a house on the opposite end of town from our two grandkids, we cross the bridges over the Willamette River regularly. I check GPS for traffic, and most days, the two major freeways are the quickest way. I call it a lucky day when the best traffic flow goes north over the Marquam Bridge on I-5, and then south over the Fremont Bridge on I-405, because those routes take you over the top decks of the bridges, with exquisite, if short-term, views. The opposite direction, on the lower decks, limits you to peering over gritty, damp cement walls. 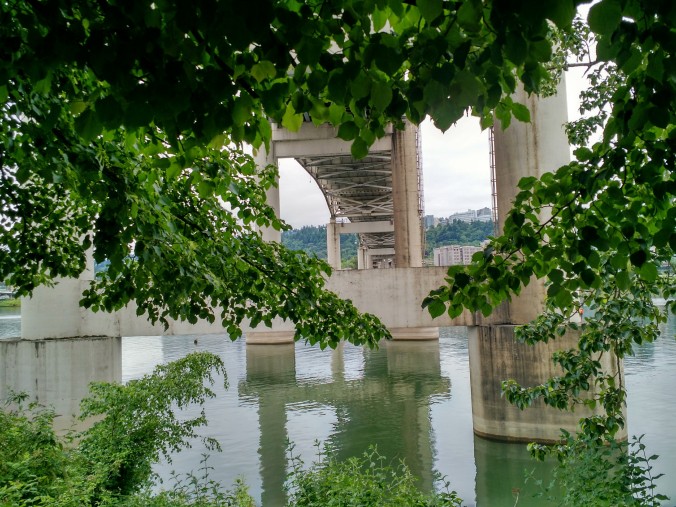 Under the Marquam Bridge by OMSI on the east side looking west at the Willamette River.

Heading north on the Marquam, you see everything that makes Portland a beautiful city.The view changes with the weather, so there’s always something different that catches the eye. The “wow, I live here,” thrill repeats every time. Every time. As you cross, you ascend high enough to see several other bridges and much of the city on either side. As you point north and east, you see the entire colorful east side of Portland laid out on it’s grid, and on a great day, both Mt. Hood and Mt. Saint Helens rise up as a backdrop, and it feels like Disneyland.

Looking left is the waterfront and harbor, and the bustling downtown. The city towers (not quite skyscrapers) poke above the busy streets, and windows of gold, or blue, or grey reflect the moving clouds and changing light. Down on the water are kayaks, speedboats and long boats, sometimes sailboats, tourist boats, or even Dragon Boats! The nearby Hawthorne Bridge might have its intriguing drawbridge rising or going down. The water surface changes, reflecting clouds and trees when smooth, or rippled with wind, broken by raindrops, or rough with small waves.

However, unless you’re a passenger, you won’t actually see most of this. Lanes converge and cars crisscross between offramps and onramps as you make several quick decisions. The road narrows to two lanes, then widens to four as you merge with the other incoming highways, and then it splits back to two just as quickly, while you decide which direction to aim for, which lane to be in, how much time you have to get there, all while trying to parse the inconclusive signage. At the same time, with little warning of what’s ahead, the road is full of big rigs, lost tourists, and Oregon drivers threatening to kill you with their tricky Oregon merging style, slowing or speeding by, merging in front and in back or from either side. It’s a good bet that you’ll have to make some death defying decisions, often with two small children in the car. But that view. 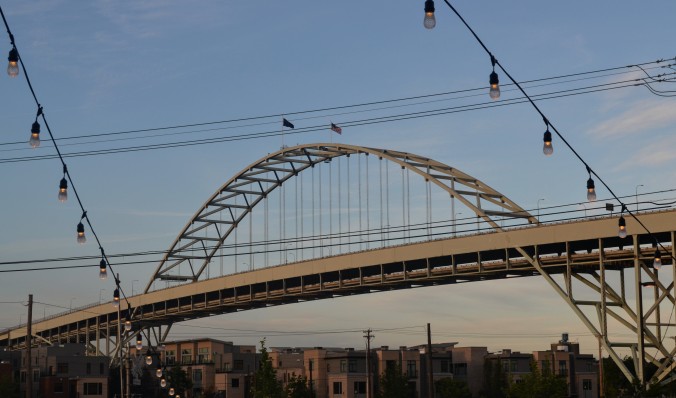 The Fremont Bridge at sunset from the Pearl looking southeast.

The iconic I-405 Fremont Bridge** takes you south and west over the river and through The Pearl and Downtown. After people complained that the Marquam was too ugly, the city worked to make the Fremont more attractive (and more expensive of course). A steep incline leads to the magnificent steel arch soaring overhead, U.S. and Oregon flags flap in the wind (on 50 foot flagpoles), and the your heart soars as if you’re nearing the top of a roller coaster.

Westbound top deck Fremont from the offramp. Eastbound lower deck on the right.

The port and shipping area below on the right, is the most industrial of industrial landscapes, dotted with enormous steel tanks, a maze of railroad tracks, and maybe a ship or two. (Built on marshy land that will liquefy in the big Cascadian Subduction 10.0 earthquake that’s ON ITS WAY, but that’s an essay for another day.)

As you cross the river the entire cityscape is laid out on either side, framed by forested hills along the western edge, particularly spectacular in the fall. Then comes a long, long downhill slide off the bridge, finally landing level with the city streets, and the ride is over.

Below the Fremont looking at the northeast industrial area

Below the Fremont looking at the northwest industrial-residential area

When my granddaughter was younger she called the Fremont, “Nana’s Favorite Bridge.” Apparently it was also her favorite. I once brought her to our house via the Marquam Bridge lower level, and she started sobbing uncontrollably, as only a three year old can. “What’s wrong?” I kept asking, unable to understand what suddenly (I thought) happened out of nowhere (I thought). Repeated garbled words through her sobbing, I finally understood her to say, “I wanted to go on the other bridge.” Traffic patterns matter little to a tired, hungry little girl, and now I hit the top deck of that beautiful bridge whenever I can.

Midway on the Fremont

** The story of building the bridge is heart stopping as well. After being fabricated in California, the 6,000 ton arch was assembled a few miles downstream, moved into place on barges, and then raised up using 32 hydraulic jacks. The flags at the peak had to be attached by helicopter. 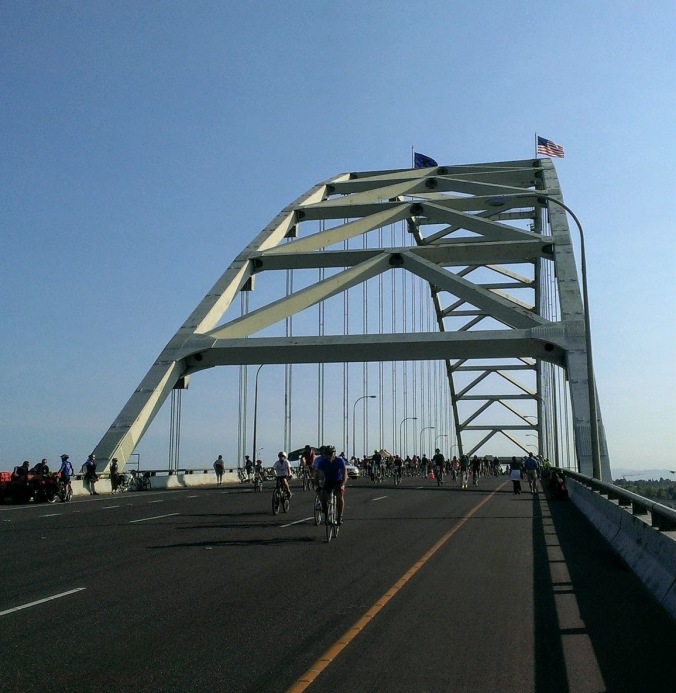 3 thoughts on “Over the River and Through the Woods: A Tale of Two Bridges”