No matter where you look, no matter how urban, how run down, or how ugly, when fall is in its prime the red, orange, and yellow makes anything look 100% better. And if you are in a gorgeous state park, as I was recently, then the beauty on top of beauty is sublime. And if it’s a day where the sun is shining and the sky is blue with wispy bits of white cloud rolling past, with the temperatures go from low 60s at the start of your hike and in the low 70s by the end, then you just wonder how you ended up living in such a scrumptious place, and how it has remained so beautiful.

The crunch underfoot, the sun filtering through, gladness inside.

After all, the last 200 years of Oregon’s history aren’t the prettiest. Most everything once was in native hands, cared for by native sensibilities, and lived upon lightly. A bit of brilliance by some who took over later, is how development all over Oregon goes hand in hand with preservation or rebuilding of beautiful places.

Such a happy color

I walked along a bike path from Champoeg State Park (sham-poo-ey) to “the historic Butteville Store.” At times it followed alongside the Willamette River, wide and slow here, dark green, glistening with life, reflecting fall colors, and inviting, so inviting, as delicious as babies. Next time I will bike the area, as 6 miles of asphalt is hard on my old joints, but for today I enjoyed the extreme quiet broken only by the crunch of leaves underfoot and a bluejay scolding amongst the Douglas Fir, Hawthorne, Alder, Maples and I don’t know what else. I learned that the Doug Fir isn’t a true fir, but I don’t really know what that means. Only that it will not help me when I want to learn to identify other fir trees.

Fall on the Willamette River

First in this area were the Kalapuya Indians who hunted and fished, and harvested camas bulbs to eat, which I had thought was just a lovely purple flower. Apparently they gave some to the Lewis & Clark expedition, saving them from starvation, though it also caused gastrointestinal distress as well. Take note. Isn’t history fun?

The trappers and traders came along in the early 1800s, and then the settlers. There was some argument as to who belonged, who should stay, who was boss. It grew to be a booming metropolis in the mid-1800s, an archetypal western town straight out of one of those Western films you remember, ten streets by six streets. It thrived, serving as a stagecoach and steamboat stop, and was one of Oregon’s first governments, with high hopes for a booming future. 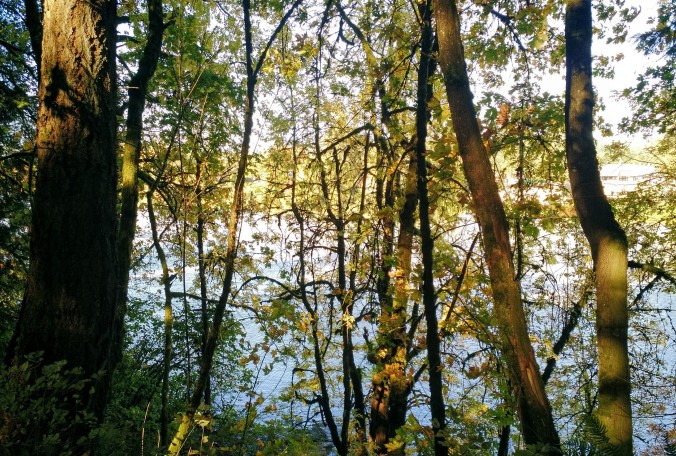 Then the river flooded, as it did periodically before dams were built after 1940, and wiped out the town of 60 buildings, though the 200 people survived. The visitor area includes historic gardens, a barn, a structure called the Donald Manson house, which a woman I was with accidentally called the Charles Manson house, so forever it will remain in my mind that way.

The campground was spread out and bucolic in an Oregon/non-California kind of way. I immediately pictured bringing the grandkids, sleeping in a tent or a yurt, cooking over the fire, biking the paths, exploring Champoeg Creek and the Willamette River. There is a lovely Frisbee disc golf course in an oak glen, and I laughed to think that right under their little rolling disc carts are the remains of a town whose people could never have possibly imagined there would be a golf course of any kind. The world keeps turning, for better or worse. In my case, I was glad to be able to walk the leaf strewn paths.

One thought on “Champoeg State Park”