The road to Silver Falls State Park, heading east toward the Cascades, takes you through pristine rolling hills, endless grand farms with recently-harvested pastures, enormous barns, big country houses, huge pieces of farm equipment that do jobs I can’t imagine, a few horses and cows, and a couple packing plants. Do you know the picture book “The Little House” by Virginia Lee Burton? I imagine these people are like that, perhaps wrongly, people living a country gentleman farmer life, everything neat and tidy, crops rolling in and out, a barn dance on weekends, playing instruments on front porches, kids and dogs running freely, quilting bees and lots of canning. Tell me I’m right. The road is layered with yellow leaves that swirl and tumble with the passing cars, much as Pigpen’s trail of dirt follows him as he walks. Mesmerized, the cares of the world slowly melt away with each passing mile.

In the last centuries the forest here has been damaged by people, beyond recognition and seemingly beyond repair. They’ve seen years of natural destructive forces and healing, extensive logging, neglect. Also strange things back in the day like promotional contests by local businessmen, sending cars over the waterfalls. Dime admission. It took just one nature lover, lobbying tirelessly for preservation, finally catching the ear of a sympathetic politician, and we now have this amazing park.

Now, you’re in a new world, without politics or mean people or sorrow, where the earth has been forming and changing for millions of years, adapting as the world changes around it, continually recovering its beauty eon after eon, day after day. You enter the woods and submerge completely into nature. You are so alive, ready for every step, every glimpse of the next waterfall, every yellow Maple leaf underfoot, every sound of the creek and the birds alongside you, senses suffused in the micro-world of nature living and dying, over and over in its own time.

The forest is mostly Douglas Fir, with plenty of Maple to add a beautiful tint of gold to your early Fall hike. Some of the tallest trees have inevitably fallen into the river, their roots finally undercut by the force of water, and you are awed by the sight of the huge trunks leaning on the banks, crossing paths and water; how mighty the fallen. Yet there is new growth on the stumps, a striving for life over death no matter the odds. The air is cool and moist, and pockets of sunshine stream down in filtered rays full of slowly drifting falling leaves.

Keeping the trails clear and safe for all.

Of the ten varying-sized waterfalls here, we saw eight. We might have ventured on to see the other two had my joints not been screaming at me after six miles, a bit more than my max. With retirement and age are many pleasures. Also discomfort.

The falls are a surprising contrast to the meandering creek, slow and smooth with an occasional ripple, now narrow, now wide. The waters then gather into a rushing force, tumbling over a precipice formed by ancient basalt lava flows. The basalt covers previous layers of more ancient sandstone, formed by an ocean that covered Oregon even before all that. Then it all cracked and heaved into new forms. The physics of it seem impossible, but then, the whole world seems impossible, that part with people, and that part without.

Everyday miracles, every day tragedies. Sleep, and I am healed once again. 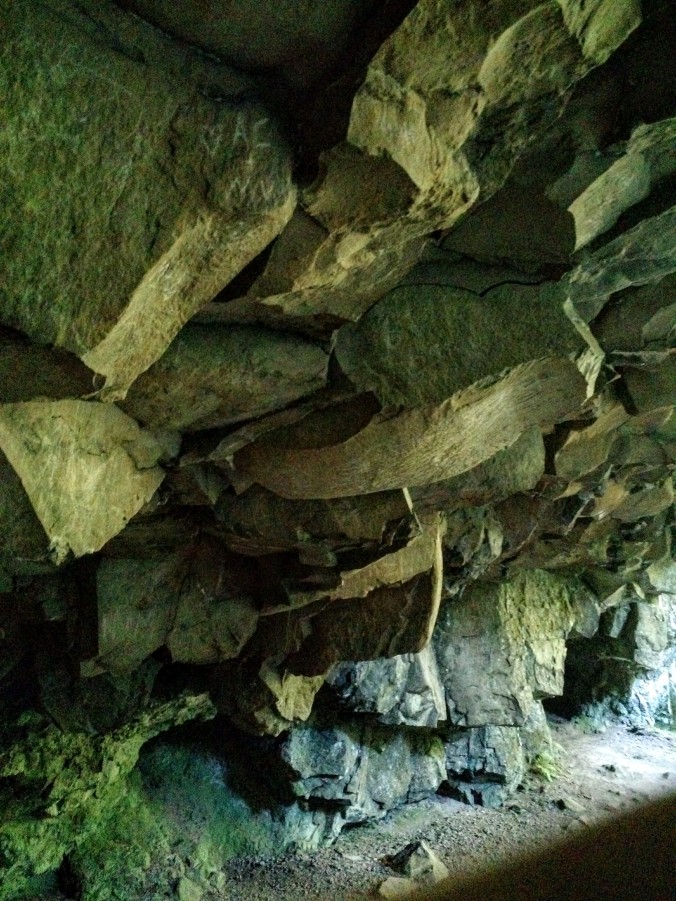 Basalt! That you stand under, and hope this isn’t the time that it crumbles.