Reflections on the Willamette River

I’ve been an ocean girl all my life, and now I’m learning to love rivers. It’s not hard. Oregon offers endless, varied shorelines to hike, watery air to breathe, and beaches of mud, rocks, reeds or berry brambles. I am new to these river nuances, and delight in discovering the seasonal changes, flora and fauna, geologic histories, ecology, and influences of the tributaries. Rivers seem more complex than oceans to me, though I’m sure some would argue with that.

Exploring river headwaters, mouths, and confluences – that moment of a river’s birth and death – is a journey of revelation, inspiration, and delight. The confluences of the roads and rivers in my life flow in a parallel stream of discovery. And I love the word confluence.

Hiking along a leg of the Willamette River just south of us, our goal is to reach the mouth of the Molalla River where it feeds into the grander Willamette. Bushwhacking our way through the undergrowth, we get instructions from some old guys we pass. After joking that we should beware of the pythons in the bush, one of them drawls, “But if you drive on over to Charbonneau, you could get there easy.” We make a good effort, and I suffer only a few bloody owies (the optimal amount) from the ubiquitous and predatory wild blackberry bushes that grow unchecked on Oregon riversides. Just yards from our goal, we fail to reach the confluence. We just may have to head over to Charbonneau.

The Willamette here is peaceful, wide, green. A few houses perch along the far shore, each with a pathway winding down to its own personal dock and floating garage. These people must be drawn to the water as I am, their lives led in some way by the tides, floods, foods, and seasons. 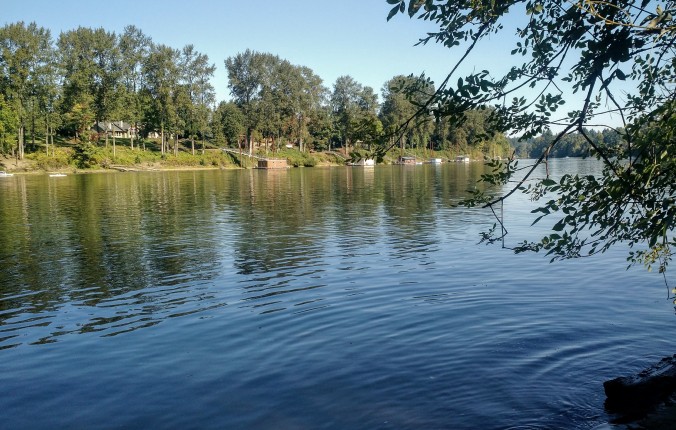 I want to live riiiiight there.

The shores of the Molalla are not so peaceful, and display the drama of the past few wild winters, lined with enormous fallen trees washed downstream. How far did they come, how many times were they caught and then freed, what animals’ lives changed? Eventually the high waters will hoist the logs up again, and they will make their way into the Willamette, the Columbia, and onward to the Pacific Ocean. We manage to flush two large blue herons though our blundering, and watch them gracefully move on to another perch further along the shoreline, all in a day’s work.

The Molalla River on its way to the mouth

We drive downstream for a stop at the Willamette Falls in Oregon City. Straddling almost the width of the river, these gorgeous falls are 1500 feet wide with a drop of 40 feet. They are second in the US only to Niagara Falls in water volume, but unless you’re in a boat, you can’t get close enough to feel that power, and have to observe from the distant cliffs. 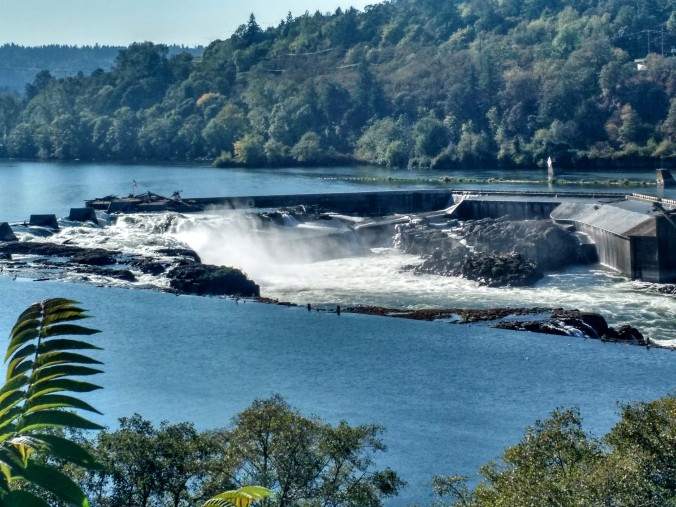 Once a native fishing ground (and no doubt sacred place), it’s now surrounded by 150 years of towering, crumbling river commerce, the trappings of hydroelectric power companies, layers of derelict paper and pulp mills that spewed waste into the river, and an 1873 lock system, one of the first in the country, in operation until a few years ago. Once marking the end of the Oregon Trail, it’s now a quiet monument to the rise and fall and histories of Oregon’s people. 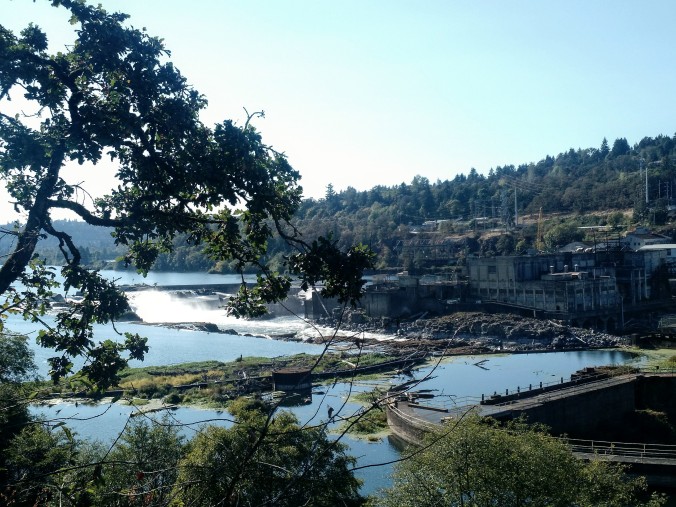 Willamette Falls and over a century of industry, now decrepit and crumbling.

Back to the Garden

It’s A Brothel Out There